LORDS OF THE RINGS: RETURN OF THE CHAMPS 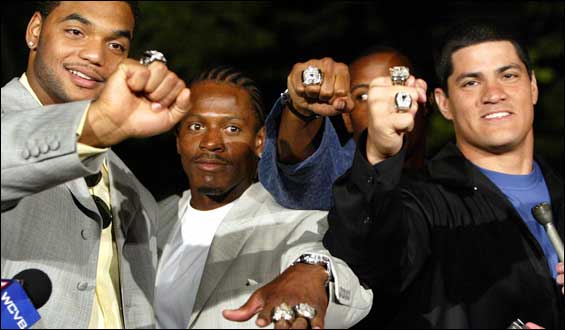 Tedy Bruschi, Ted Johnson, and Richard Seymour won't be there, but the rest of the Super Bowl XXXIX Champions will be at Gillette Stadium's practice fields for the first public practice of training camp today at 8:45 AM. The Pats have some problems to sort out. The lack of returning middle linebackers and the Richard Seymour situation being the two most prominent. Also, a new defensive coordinator and no offensive coordinator. If any team can work through these difficulties, its the Patriots.

Rodney Harrison's contract appears to have been reworked. Seymour faces $6,000 fines every day he misses camp. Rookie Wide Out Michael McGrew was cut by the Pats. Receivers Bethel Johnson and Tim Dwight were placed on the physically unable to perform list with foot-related injuries.