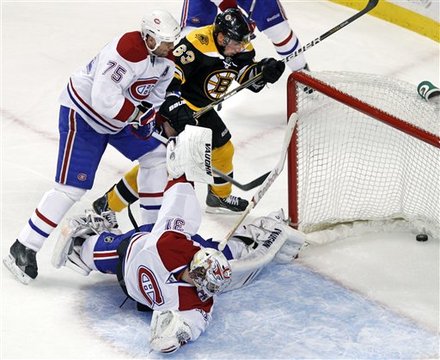 The Bruins didn't just kill the Canadiens, they took their souls.

When these teams have met this season, the game tends to be decided early. That trend continued. The Bruins were in charge from the drop of the puck. The Power Play struggled with entry, but once they took the zone, they stayed there. The Bruins simply wanted it more.

Everyone contributed (except Ryder). Gregory Campbell atoned for his mistakes in the New Jersey game with a rare 3-on-5 goal. Horton looked like a scorer again. Peverley was a few inches here and there from a multi-point night.

The defensemen played well in all three zones, smothering the Canadien forwards, and contributing on offense. Like Chara with 3 assists. Kaberle with his first goal as a Bruin. McQuaid scored, as did Boychuk, who was in playoff form all night.

The Bruins didn't do much wrong last night. It was a Flawless Victory, with Campbell's 3-on-5 goal the Fatality.

You had to be pleased with the Bruins putting in maximum effort for 60 minutes. Actually, 60 minutes and 2 seconds, because that's when Seguin shot the puck at Auld after the buzzer.

So let's enjoy this big win over our ancient rival. But come Saturday, this is in the past. Bruins host a team that actually has a heart. They're called the New York Rangers. That's another potential playoff preview.