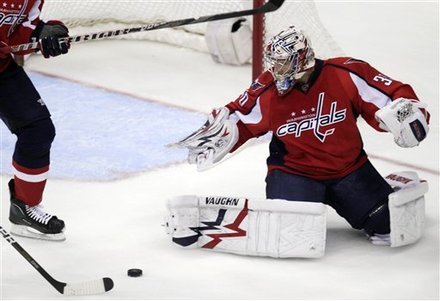 This was the biggest test of the year for the Bruins. New Jersey had been scuffling. But the Caps had been excelling. And the Bruins went down to Washington and won 3-1.

It is once again Tim Thomas time, folks. All the Tuukka Rask fans can pout, but Tim Thomas, so far, is back to Vezina form. He had more than a few big saves early on that maintained a 0-0 score until Horton and Krejci hooked up in the 1st. 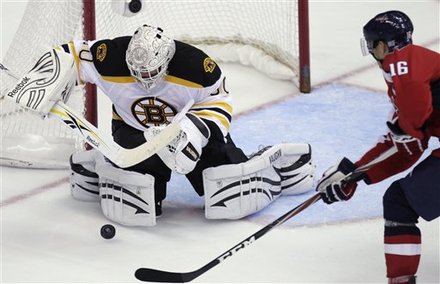 I'm in love with Nathan Horton already. Unlike useless forwards like Ryder and Wheeler, Horton just understands what to do with the puck. He has good instincts, he's calm, he's precise, he's an NHL forward. Everything he does has a purpose. There's little hesitation, and no confusion.

Goaltending is an equation of time and space. How much time will some space be open for a shot to slip past. Horton's pass to Krejci, and then Krejci's sharpshooter strike, was an example of forwards defeating the goaltender's time/space equation. The space was closing, but Horton passed perfectly to Krejci, and Krejci shot in time to beat the goalie. Beautiful stuff.

Milan Lucic has added goal scoring to his repertoire. He's tallied 3 already. It took him 16 games to score 3 goals in 09-10. He's been hanging out in the slot, utilizing his quick hands, and outmuscling/outworking his opponent. Not only is he a junk-goal-junkie, he's a warrior on the boards, winning one-on-one battles about 2/3 of the time.

Speaking of warriors, Gregory Campbell is quickly becoming one of my favorite players. The Bruins need guys like this, who have an identity as a player. Blake Wheeler is still trying to find himself. And Michael Ryder is a finesse player that lacks the skills and poise to be any good. Campbell will not score, except by accident. Even his occasional assists will be by default. But he can alter the tempo and pace of a game.

If the Bruins could get their Power Play working, look out. That might change when/if Savard returns. Sturm also helps that unit.

Capitals @ Bruins in the home opener Thursday. Are you pumped? Because I'm pumped.