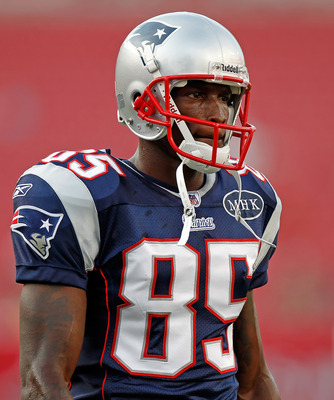 ESPN's Adam Schefter is reporting that the Patriots have released Chad Ochocinco. They did so after spending the day looking to trade the wide receiver, but being unable to make a deal. Ochocinco left the Stadium before OTAs today, but that was claimed to be due to an eye doctor's appointment.

This is not surprising at all. Ochocinco was retained last year despite his playbook comprehension problems because the WR depth chart was so shallow. Now with Wes Welker returning, Jabar Gafney, Brandon Lloyd, and Donte Stallworth arriving, not to mention Deion Branch, and Julian Edelman sticking around, there just wasn't enough reason to not cut Ochocinco.

He already took a paycut. And if he hadn't, he would have been cut long ago. There have been stories out of the Patriots' OTAs that he needed to be helped by Branch to run the right route. So it doesn't seem like he's getting it.

Quite simply, with the additions of all these WRs, it became very easy to cut him loose.

I'm sure he'll get picked up by another team. He's a talented player. He just didn't get the playbook here.

But before he can get to that next team, he'll have to negotiate Route 1. And we all saw how much he struggled with routes here in New England.

Good-bye, and good luck, Chad. Thank you for trying.

Say what you want about Mumbles Menino, we could do a lot worse in Boston. Washington, DC once had a crackhead for a Mayor. And New York's Michael Bloomberg is a dictator that's trying to ban large soda, and everything else he doesn't enjoy. All we have to deal with in Boston is Menino. A funny sounding guy who mispronounces things. If he ever tried to ban soda, people wouldn't understand him anyway.

Maybe Menino got Rajon Rondo confused with John Havlicek, whose nickname was Hondo. Menino has lived in Boston all his life. He was 15 when the Celtics won their first title, and he grew up when the Celtics reigned over the NBA. Havlicek was drafted by the C's when Menino was 20. He saw them win 11 titles before he was 30 years old. And he saw Havlicek win 8 titles. And a famous Havlicek play-by-play account from Celtics history was something Menino amazingly got 100% right in this appearance:

So I think Menino was thinking about Havlicek, who was probably one of his favorite players as a young man. Or maybe he was equating Rondo to John Wayne, whose character in the movie Hondo Havlicek was nicknamed after. Notice at the start of this trailer for Hondo, it mentions the Heat. Weird coincidence.

Or maybe Menino had recently watched the Married With Children Episode when Al gets trapped inside a grocery store and can't watch a TV broadcast of Hondo.

Whatever the case, this wasn't one of Mayor Menino's normal malapropisms. I think he's trying to send a message. I just can't figure out what it is.
Posted by rob at 2:40 PM No comments: 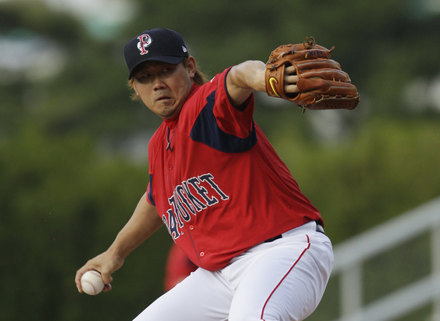 Daisuke Matsuzaka will be back in Boston just about a year after undergoing Tommy John surgery. He last pitched for the Red Sox in May of 2011. He's made six rehab starts, totaling 37 innings. He had a 3.65 ERA, 31 hits, 9 walks, and 30 strikeouts. He also had high pitch counts. His final rehab outing lasted 2 innings (it had been scheduled for 3) on Tuesday. He threw 40 pitches.

On Saturday, he'll face 7-2 Gio Gonzalez and the Washington Nationals. Even though the Nats are in 1st place, their offense isn't very good. 26th in runs scored. And thankfully for Daisuke, 22nd in OBP, and 14th in walks.

With most pitchers, some things to watch in their first start back are throwing strikes, working with rhythm, being efficient, keeping people off the bases, is their fastball fast and their curveball curving. Of course, Daisuke is not most pitchers. He can have a good start and walk 8 batters.

What should we expect from Daisuke? Frankly (and not surprisingly), my expectations are low. This is a guy who was brilliant for two years (33-15, 3.72 ERA his first two seasons), then ugly for two (16-15, 5.03 ERA). Any other starting pitcher developed normally in the minors would have been dismissed as a flash-in-the-pan that was figured out by MLB hitters, and couldn't cut it in the Majors. But since Daisuke did so well in the quadruple-A equivalent Japanese League, he still is expected to do well over here.

Negativity aside, there is at least potential for him to be good. We've seen it. And if he's not good, he can at least be serviceable, pitching 5 innings (with a 120 pitch count), and giving the Sox a chance to win. That's more than can be said for Daniel Bard, who Daisuke will replace in the rotation.

Bard will be making a start in AAA Pawtucket on Friday, as the PawSox face the Indianapolis Indians (who are the Pirates' AAA affiliate). Although it is technically a start, he will not be working as a traditional starter. His appearances will be short. The Red Sox claim that this is so he can focus on getting himself "back to being an elite pitcher." That's what Ben Cherington said. This minor league stint is about Bard getting back "on track."

In other words, Bard will be pitching short outings until he's shown the quality we've seen from him in the past. If he does well and Matsuzaka struggles, Bard can return to the rotation and give starting another go. If Matsuzaka settles in, then Bard can return as a reliever.

The Sox are being very diplomatic with how they're discussing Bard. They don't want to crush his confidence. They need Bard to fix his problems before he can return as a reliever or a starter. Matsuzaka gives them an easy way to be kind to Bard and say "We have 5 starters already, but we need your quality in the pen." It's sort of like a girl saying "let's just be friends." You don't feel quite so bad if she's already got a boyfriend. 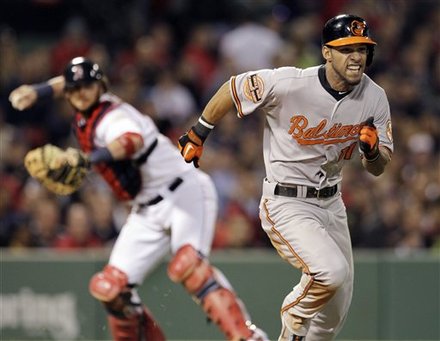 You can't ask for much more from Josh Beckett. The starting pitching as a whole has been good lately. But the inconsistent Sox offense has once again cooled off. The Orioles have won their 7th straight game in Fenway Park, and that's simply shameful.

The reason the Sox are so streaky as a team is because they're streaky as units and as individuals. Incisive analysis, I know. When one aspect of this team struggles, though, it struggles big time. When the starters stink, they barely make the 5th inning. When the offense isn't hitting, they struggle to get 2 runs across the plate.

Look at a guy like Beckett. Brilliant one week, mediocre the next, crappy the next. And this lineup has been carried by role-player types, like Aviles, Ross, and Saltalamacchia. They can't go 2 for 4 every night. Not having Ellsbury hurts. Gonzalez just hurts.

The Sox offense is very good at piling on runs when a pitcher is struggling, and getting big innings. But when a pitcher is having a good night, the Sox will struggle just to get on base. And bunting isn't the answer. Neither are stolen bases. The Sox can't afford to use outs to get runners in scoring position. Then they have fewer outs/chances to knock those runners in. And they have a much smaller chance at scoring multiple runs in an inning.

On the bright side, Beckett pitched well. He went 8 and only allowed 2 runs off 5 hits. He didn't walk anyone. He struck out 5. Since being shelled on May 10th, he's gone 7+ in five straight starts. His record is 2-2 in those starts, but his ERA is 2.21. You can't ask for more from him, only that he keeps up the good work. Which has been an issue for him over the course of his career.

Darnell McDonald returned to the lineup, and was 1 for 2 with a double and a sacrifice bunt. I don't like small ball tactics. Runners on 1st and 2nd with no outs and the Sox give the O's an out. Byrd struck out after that, and Aviles popped out.

It was such a Bobby Valentine thing to do. And I won't say it cost the Sox the game, because it didn't. Their inability to get any hits cost them the game. But Valentine can't help but do something to influence the game. He's compelled to attempt to exert control over it. He can't just sit back and let it happen. Giving free outs to an opponent isn't how to break out of a slump (which is when you're already giving opponents too many easy outs). It only makes scoring harder.

They need another good start from Buchholz tonight. He faces Brian Matusz. Matusz struggled in April. But in his last five starts he's 4-1 with a 2.87 ERA. One of those wins came against the Sox.