Who Does Josh Beckett Remind You Of?

What I'm not at all sorry about is how happy I was that he was booed after taking himself out of a game Tuesday night. While I'm sure the injury is legitimate, I have little sympathy for someone with such a low threshold of pain, and absolutely no sympathy for an athlete that doesn't take care of himself.

I can't figure out who Beckett reminds me of more. J.D. Drew, or his boyhood hero Roger Clemens.

Drew had no tolerance for physical discomfort. And neither does Beckett. For Beckett to operate at 100%, it seems like everything needs to be perfect. His back, his blisters, his lats, the wind, the weather, the crowd noise, the pre-game meal, the golf game he played two days earlier. He can't pitch well if just one little thing is off. He's a diva.

The great athletes are able to summon greatness when not in peak physical or mental condition. Michael Jordan with the flu, Pedro Martinez in Game 5 of the '99 ALDS, even Brett Favre the day after his father died.

I'm not asking or expecting Beckett to throw a perfect game with a strained muscle in his back. But it would be nice if he were able to pitch well even when feeling uncomfortable or in pain. Or just try to pitch at all. He seems more willing to leave a baseball game early than cancel a golf game.

He'd rather sit out then push through. Which is very J.D. Drew of him.

At least Drew was in shape, though. Beckett isn't. And this is how he is like his idol, Mr. Roger Clemens. As Clemens' career in Boston progressed, he added some Texas Toast to his body. His waist grew, his ERA grew, his innings decreased. That's very similar to Beckett. Beckett is 32 now, the same age Clemens was in the middle of his plumping and slumping.

I wonder if Ben Cherington will say that Beckett is in the "twilight" of his career. Then Josh will wind up with the Blue Jays, miraculously get in shape, throw 496.2 innings in 2 years, and win a pair of Cy Youngs.

In some ways, Beckett is worse than Clemens. The Red Sox Front Office battled Roger Clemens. Now, the Front Office enables Beckett. This lack of control over Beckett makes him a more dangerous monster.

Beckett is the guy more worried about finding the identity of last year's "snitch" than making the playoffs.

Beckett is the guy who golfed while injured, then instead of explaining that he was approved to do so, quoted how many days off he had and that it was nobody's business how he spent them.

And the Front Office refuses to rein him in. They fired Francona and kept Beckett. But Valentine hasn't been a disciplinarian at all and doesn't seem to have support from the Front Office to be one. Most recently, the Sox allegedly had a chance to get rid of Beckett and send him back to Texas. They chose to keep him.

The Red Sox actually seem afraid to drop Beckett. Getting rid of him would be the same as waving a white flag for the 2012 season. That's true, but it would also give the green flag for the Sox to win in 2013 and beyond. Cherington didn't have the power to pull the trigger. Lucchino doesn't have the stones to sacrifice this mediocre season and look to win in 2013. And John Henry is probably looking to buy an Aussie Rules Football team.

Beckett is a perfect storm of jackassery. He doesn't stay in shape, he's a detriment to team morale, he's a bad influence on younger players, and he's soft (literally and figuratively).

If Roger Clemens, J.D. Drew, and a used douchebag could have a child, they would name it Josh Beckett. 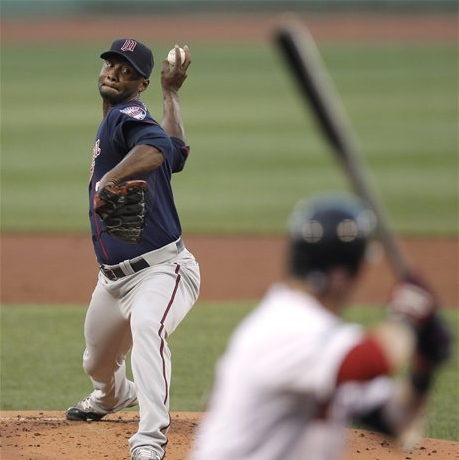 The Red Sox are back to .500 again, thanks to even more inconsistency. This time it was the offense who failed to support the starting pitching. Not to mention a bullpen that failed to keep the game close in the end.

All season long one unit of the Red Sox has slumped while the other have done well. The SPs make Quality Starts but get no run support. Then the lineup tears things up, but the bullpen blows the game or the starter goes 4 innings. This team undermines itself.

If everything clicked at once, this could be something more than a .500 team. But why expect those planets to align when they haven't yet for 106 games?

On the bright side, Lester had a very Lester-like start. 8 innings, 3 runs, 7 hits, 0 walks, 7 strikeouts. Not amazing, but very very good. This type of start was his bread and butter from 2008 to 2011. And it's refreshing to see him back to form.

Give credit to Samuel Deduno, who struggled in his first 2 starts of the season but has settled into a groove in his last 3. He's 3-0 with a 0.93 ERA in those starts. The Red Sox aren't the only team he's done well against.

At the same time, the Sox were 2-hit by the Twinkies. They should be ashamed.

Word to the wise, don't invest hope in this team. They'll go on 4 game win streaks, they'll look like they've turned a corner, but it's all a tease.

Felix Doubront faces Brian Duensing tonight. Doubront continues to be a solid part of the rotation. Duensing has spent most of his season as a reliever, and not a particularly good one. The Red Sox have no excuse to lose tonight.