TED WILLIAMS AWARD FOR RED SOX PLAYER OF THE YEAR

With all that’s going on with the Patriots and Celtics, the Red Sox winning the World Series is almost at the backs of our minds. But they lead from wire to wire, spending more days in first place than any other Red Sox team in history, winning the AL East for the first time in 12 years, and becoming the first two-time World Champs in the 21st century.

Here are the nominees for Red Sox Player of the Year:

After what we saw in the post-season, is there any doubt that Beckett was the best pitcher in baseball In ‘07? But Beckett’s playoff performance may have overshadowed what was a truly amazing regular season. Beckett went 20-7 with a 3.27 ERA. After allowing 36 homeruns last year, he yielded a mere 17 in 2007. After walking 74 batters in 2006, Beckett only issued 40 free passes this season. He only hit 5 batters, as opposed to 10 in ‘06. He only threw 3 wild pitches, as opposed to 11.

Combining his regular season and post-season numbers, here’s what Beckett gave us:

DREW BLEDSOE AWARD FOR PATRIOTS PLAYER OF THE YEAR 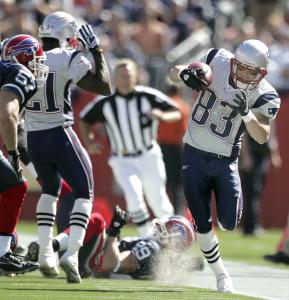 Yes, Brady and Moss have the numbers, the records, and the highlights. In fact, Welker isn’t even going to the Pro Bowl. But the player who has impressed me the most on the Patriots has been Welker.

He was a workhorse. He got the couple yards here and there that kept drives alive, and set-up the big downfield plays to Moss. Welker had 112 catches, surpassing Troy Brown’s club record of 101. Wes was a lot like Deion Branch in terms of dependability. Of his 112 catches, 65 were for first downs.

He was a diversion. Defenses couldn’t put all of their focus on Moss going down the sidelines because Welker would be lurking underneath and exploit deep coverage for a big gain after the catch.

He was a slippery SOB. I could count on one hand how many times the first attempted tackler took Welker down. He seemed to get an extra 3 yards on every play, sometimes getting 10 or 15 bonus yards.

He did everything. He rushed the ball 4 times this season, breaking one of those for 27 yards. He returned 7 kickoffs for 176 yards, or a 25.1 average. He returned 25 punts for 249 yards. Although he never returned one all the way, his 10 yard return average always gave the Patriots a nice boost to start their offensive onslaught. And in a pinch, he could have replaced Gostkowski as the place kicker.

He did everything he was asked to do, and did it well. He had good numbers and was Brady's most dependable option.
Posted by rob at 12:41 PM No comments:

BILL RUSSELL AWARD FOR CELTICS PLAYER OF THE YEAR

Last year this Award was a no brainer. There wasn’t even another nominee besides Pierce. But this season, I think you can guess as to who the three nominees are:

We have a tie. The entire PGA Tour will be sharing this award! 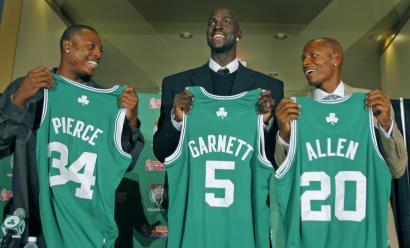 We all know the story. Last year, the Celtics were in the lottery. This year, they’ve already surpassed their win total from the 06-07 campaign, and are on pace for a staggering 74 wins. The C’s are 11 games ahead of Toronto, the largest divisional lead in the NBA. The PGA Tour just finished a 4-0 West Coast road trip, something unimaginable last season.

Combined, Pierce, Garnett, and Allen are averaging 20.0 rebounds a game, 11.6 assists per game, and 59.5 points per game. They’ve also made other players better, like Tony Allen, Kendrick Perkins, Eddie House, Rajon Rondo, and Glen Davis. And defensively the Celtics have held opponents to 87.8 points per game, the lowest points allowed total in the NBA.

The Celtics are back in business, and it is thanks to the PGA Tour.
Posted by rob at 12:37 PM No comments:

BOBBY ORR AWARD FOR BRUINS PLAYER OF THE YEAR

Patrice Bergeron would have probably won this were it not for his injury. Without him, the Bruins have still remained in the mix, but he has been sorely missed. The veteran from Ottawa is fourth in the NHL in assists with 34. He’s been the key to most of the Bruins offensive opportunities this year. Last season, he totaled 74 assists and 96 total points in a career year. With the absence of Bergeron, he’s become the Bruins’ most potent offensive weapon with 9 goals, and 43 total points.
Posted by rob at 12:32 PM No comments: