LeBron James is trying to get hurt, media wants to see him get hurt 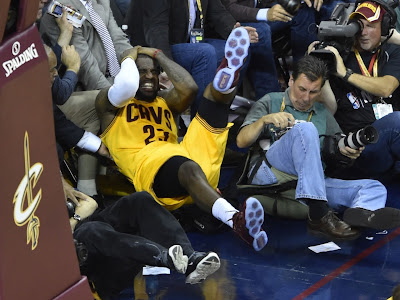 The story of LeBron James, a.k.a. King James the Great, was already written and published long before he set foot on an NBA court. Years before he was old enough to enter a casino and gamble recklessly with Michael Jordan, LeBron's legacy was already being compared to MJ's. It was foolish and unfair to compare someone who had barely played the game to the greatest who ever played. It's like seeing Johnny Depp act in a high school play, then comparing his acting ability to all of Marlon Brando's work.

LeBron's legacy and legend have always preceded him. He was a great player before he ever played. He was a winner before he won. He was one of the greatest of all time before he had played enough time to do anything. The story of LeBron James's career has always been told before the facts had a chance to catch up.

And now to enhance that legacy and justify their LeBron worship, ESPN and the rest of the sports media want to see LeBron suffer some sort of injury, then play through the pain, and carry his team to victory. They want LeBron to have his Willis Reed moment, they want to see LeBron have the equivalent of Michael Jordan's flu/hangover game against the Jazz. And so since it would bolster LeBron's legacy, each minor malady that afflicts him becomes the focus of attention. Because it's an opportunity for reality to fulfill the prophesy of LeBron's legend.

And LeBron is no passive victim of expectations in all this. We shouldn't blame him for being overrated, but we can blame him for overrating himself. LeBron also wants to enhance his legacy with a memorable injury-game. Which is why he turns every pain into a show. Every bruise causes an awkward limp. Every fall elicits a scream and the cradling of possibly injured limbs. Every cramp requires a grimace between plays. And each corpuscle of blood shed becomes a gusher.

And he wants to get hurt. He dove into the photographers on purpose Thursday night. He launched himself into them. Why? So he could get up gingerly. Or stay on the floor in a fetal position, yelling and screaming in agony.

The reaction of the media was so dramatic after he was cut Thursday night, I'm surprised that the Cavaliers didn't initiate an emergency blood drive in the arena, and give LeBron rapid transfusions during TV timeouts.

LeBron got hurt, which is exactly what he wanted. It's what the media wanted too. They got a raging LeBroner as the man lived up to the legend. As CBS Sport's Ananth Pandian marveled "That LeBron James is one tough guy."

I don't know who was happier about LeBron getting hurt, himself or the sports media who want facts to justify the legend they built around him.