New England Once Again Turn Themselves Into Super Bowl Contenders

If a person watched just the first half of the New England-Denver matchup in Week 12, they probably left wondering why Tom Brady is not calling it quits. The Patriots were getting embarrassed on their own field, and the future Hall of Famer looked old. Something changed at halftime though, and Brady posted his typical fantasy football numbers on his way to a win. Now that they have knocked off Peyton Manning and Denver, can this team be considered an AFC Championship contender?

Right now, the Broncos and Kansas City Chiefs are the only two teams with better records in the AFC. One of those two teams will slide down in the playoff rankings, so New England could comfortably cruise into the playoffs as the #2 seed. Not bad for a franchise that has been lost at times this season. Many fantasy football owners had no idea who Brady would be throwing to at the start of the year, but everything seems to be falling into place now. It helps that the running game has picked up as well to keep the pressure off of him.

While any team can pull off an upset in the playoffs, three teams in particular could stand in New England’s way. The Cincinnati Bengals already beat the Patriots this season, and they made the offense look terrible. However, that was back at the start of October, when the team wasn’t full strength. The Colts pose a threat simply because Andrew Luck could get hot and outgun the aging Brady. If it becomes a fantasy football showdown, some might actually favor the youngster at this point.

Had Bill Belichick done anything like what Mike Tomlin did on Thanksgiving, potentially impeding a Jacoby Jones during a kickoff return, the public outcry across the nation would be deafening. The New York Post would print an entire sports page in asterisks. Marshal Faulk would claim that the Rams dynasty was somehow ended by where Belichick stood on the sideline in Super Bowl XXXVI. It would be a field day for Patriots haters.

Mike Tomlin has been fined $100,000 for his sideline shuffle. The Steelers might also lose a draft pick. And I actually think that's kind of harsh. I understand that you want to deter coaches from doing stuff like this. However the best way to deter this is to penalize the team 15 yards. Nothing hurts a coach more than costing his team 15 yards and potentially allowing his opponent to get into the end zone.

Not penalizing Tomlin was obviously incorrect. How did the refs not call him for this? There's an official right there! And that official has to avoid Tomlin too!

Inadvertent or intentional, it's the responsibility of everyone on the sideline to remain well clear of the play. Had a photographer or security guard or cheerleader gotten that close to the action, they'd be removed from the field, possibly fired. Had a player on the sideline done this, they'd be penalized. Why didn't the refs call Tomlin?

Had they done so, that would have ended it. Tomlin would never have done it again. No coach would copy it. There'd be no controversy. Maybe no fine or loss of draft pick.

Once again, NFL refs made a bizarre, inexplicable decision. At least this time the NFL seems to acknowledge that they were wrong. Maybe "acknowledge" is too strong of a word. The NFL hasn't rushed to defend this crew for blatantly screwing up.
Posted by rob at 2:31 PM No comments: 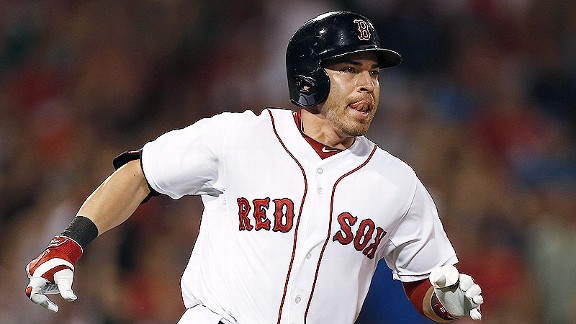 It's a sad day for the Pink Hats. Well, it will be a sad day in a few months when they turn to their friends and ask "Where's J-Cobes?" Once they realize that their favorite Fenway hottie is gone, they'll cry more than they did the day Tyler Seguin was traded.

The Yankees bought Jacoby Ellsbury early in the Holiday Shopping season. Although they didn't get much of a bargain. A total of $153 million for 7 years. Ellsbury turned 30 in September.

I would have preferred he stay with the Sox. He's a good player. He was a key component in two World Series winning campaigns. Players like him don't grow on trees. Et cetera.

He's not worth this price, though. Not for that many years. Five years and $100 million, maybe. Maybe.

My two biggest issues with Ellsbury are that he performs much better in contract years than non-contract years. And that he lacks power. His best asset is his speed.

He's been able to utilize that speed to compensate for his lack of power. However how much speed will he have toward the end of this contract? Will he be stealing 50 bases a year in 2018? Will he steal 20?

His other production isn't enough to justify such a heavy and lengthy commitment. His OBP (.355 last year) is good, not great. He's hit 65 career homeruns, 32 of which were in that freakish Brady Anderson style contract year of 2011. He's never reached 10 HRs in any other season.

There's an old saying in baseball: "Speed never goes into a slump." That's true. At the same time, speed does disappear with age. When speed disappears for power hitters, they can still drive the ball out of the park or off the wall. When speed dependent players like Ellsbury slow down, their careers slow down.

Ellsbury helps the Yankees. And for the next 3 or 4 years this deal might look wise. Unless Ellsbury gets hurt. Which also has a tendency to happen. I don't question his fortitude as much as others have, but he's hardly an ox. Anyway, in a few years the Yankees will have an old, slow, poor hitting, poor fielding, poor throwing outfielder collecting $21.8 million a year. The Red Sox will have $153 million to spend on a more complete player or players.

Yankees first play the Sox on April 10th in the Bronx. The first Fenway series starts on April 22nd. Tickets for these games have just skyrocketed to the top of many Christmas Wish Lists.
Posted by rob at 10:00 AM No comments: