There's only one Pedro.

And he pitches tonight in the World Series. His second career World Series start. As much publicity as Curt Schilling gets for his playoff record, Pedro's isn't exactly shabby. He's 6-2 with a 3.13 ERA and 1.054 WHIP. In 86.1 postseason innings, he's struck out 83 batters.

Schilling had the bloody sock, Pedro had a less visible but more impressive effort in Game 5 of the '99 ALDS. With a bad back and an 88 MPH fastball, he mowed through a murderous Indians lineup (Lofton-Vizquel-Alomar-Ramirez-Thome, etc. The Indians scored 1,009 runs in 1999), pitching 6 innings of NO-HIT relief to win Game 5. 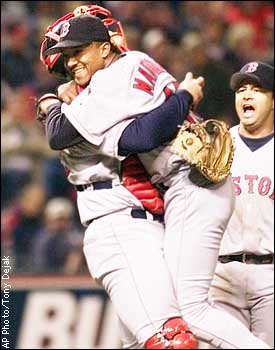 Later in the '99 ALCS, Pedro was the only pitcher to record a postseason win against the New York Yankees that year. That's right, the Yankees went 11-1 in the 1999 playoffs, and that 1 loss was thanks to Pedro (and Roooooooooooooooooooger).

In the latest NLCS, he was once again brilliant. 7 innings, 2 hits, 0 runs. He was lifted after 87 pitches because the NL sucks and makes pitchers get pinch hit for. Then the Phillies' bullpen blew the 1-0 lead.

Pedro is my favorite player in all sports. People think the Yankees will rock him tonight. Maybe. Maybe not. I just think it's fun to watch him pitch. He doesn't have the same blistering fastball, and his changeup is less effective, but now he's a crafty veteran who can outwit hitters and still make them look like fools.

I just wish Nelson were still alive to be his good luck charm.

IF MIKE SCIOSCIA IS SO GREAT...?

It seems like the Sox play the Angels every year in the ALDS. And every time that happens, we hear about how great a manager Mike Scioscia is. How "aggressive" he is on the basepaths. How fundamentally sound his teams play. How great of a "strategist" he is.

Yet what nobody talks about with Scioscia is the attitude his teams have, the kind of personality and atmosphere the Angels' clubhouses display. In fact, managers like Terry Francona, who helps generate a calm and relaxed team atmosphere, are often criticized or even ridiculed for their strategic shortcomings. Being a "player's manager" is dismissed. When guys like Francona are compared to Scioscia, it's the guy like Scioscia who is often credited with being the better manager.

Mike Scioscia is 21-24 in postseason games. We saw in the ALDS, that his running Angels only stole 3 bases. They also ran into outs. And in the ALCS, we saw a tight, wound-up, choking performance by the Angels defense.

So maybe chess-masters like Mike Scioscia and Tony LaRusa can take a few tips from laissez-faire guys like Francona and Torre. Maybe Mike Scioscia isn't as amazing as some believe.

And I realize I should've written this a week ago, but I don't have a guy like Scioscia pressuring me, so I write when I want.

Source:
Baseball-Reference.com
Posted by rob at 12:00 PM No comments:

This was just sheer domination. The Bobcats had 10 points in the 3rd quarter. Come on. That's just sad.

What can you really say about this game? The Celtics are simply better. They also played 100%, and had the home crowd behind them. KG was +34. Rondo had a double-double with 10 points and 11 assists. Shelden Williams added 12 from the bench.

The victory within the victory was giving a rest to guys like Garnett. KG went 33 minutes in Cleveland Tuesday night. Doc was able to keep him to 26. and Pierce only needed to participate in 25 minutes. It was also a good opportunity to give the bench some minutes.