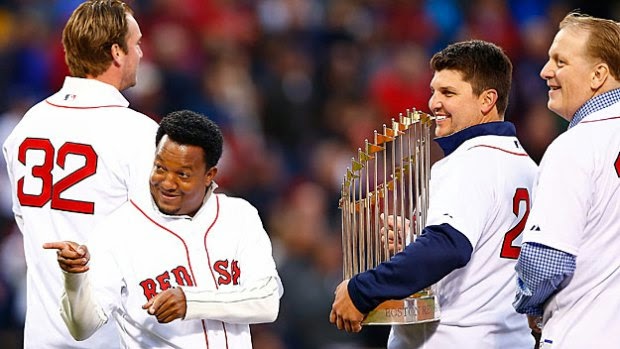 A Wednesday night in late October 2004, in a dorm's common room in Ithaca, NY, about 18 college students all focused on a low-def TV attached to a wall. On the screen, a ground ball bounced lazily up the middle to Red Sox closer Keith Foulke. After collecting the ball, he trotted a few steps toward first. As the ball left Foulke's hand and spun toward the waiting glove of Doug Mientkiewicz, time froze in my mind. It was happening. It was actually happening.

Until that moment, I feared the Red Sox would blow it somehow. That they'd find a way to lose Game 4, then the series, completing the worst collapse in the history of sports, because that's what I was convinced they had to do. In the years leading up to this moment, I had read and heard about Buckner in '86, and Dent in '78, and Enos Slaughter in '46. Aaron Boone's homerun the year prior was my generation's firsthand experience of The Curse. They must lose. That was the way of things.

Mientkiewicz would drop the ball, the Cardinals would rally in the 9th and win the game. The Sox would lose 4 straight, mirroring the 3-0 collapse of the Yankees in the ALCS, making the choke even more spectacularly painful. All that late-inning magic, all those stressful games, all of it a buildup to the biggest disappointment in sports history.

None of that happened.

Mientkiewicz caught the ball. Once I unfroze time, only a second had passed but it felt like more than a minute. Jumping around in jubilation in the common room wasn't enough. We ran outside to the quad, yelling, screaming, hugging. Our yells drew Sox fans from the surrounding buildings, who poured out into the night to join us. As the crowd grew, someone suggested we run to the fountains on the other side of campus. There, other groups of Sox fans from other parts of campus seemed to somehow know to meet us. It must have been some psychic connection, or some notion of a central location to gather. It wasn't coordinated on social media. Twitter didn't yet exist. We wouldn't know what Facebook was for another 2 weeks, when it swept across Ithaca College's campus in early November 2004.

Hours later, after we'd all returned to our dorms and our rooms, at about 1:30 a.m., a friend from North Reading came to my room and said he couldn't sleep. Neither could I. We decided to drive to Boston, along with our RA from Newton. We drove 6 hours. My friends slept, I stayed awake and watched the sun rise over Massachusetts, shining down on the home of the World Series Champs for the first time in 86 years. That's 1,032 months, 4,472 weeks, 31,411 days, 754,000 hours, 45.2 million minutes, 2.7 billion seconds.

2.7 billion seconds, and I still clearly remember that last second, the one I froze, as the ball and landed in Mientkiewicz's oversized first-baseman's glove. That moment felt like it lasted a minute. The feeling lasted longer. I can still go back to that moment and relive it, and feel that feeling again. It's great. Pure joy.

So yeah, it was pretty cool seeing the 2004 Red Sox back at Fenway Wednesday night.