Why the NFL Will Never Succeed in Britain

For the fifth straight season, a pair of NFL teams met each other in London's Wembley Stadium. And once again the game sold out. But don't expect a Super Bowl in London, certainly don't expect an expansion franchise across the pond, and don't expect American football to be any bigger in the UK than soccer is in the US. The Brits simply do not like it.

Why? Firstly, they have soccer. They obsess over soccer. They have their own leagues, plus they follow leagues in Spain, Italy, and Germany. Then they have international games. Soccer is their fall sport. It's as big as college football in Alabama.

Some of the British enjoy physically violent sports. Which is why they have rugby. And unlike American football, rugby has more flow to it. Our football stops after every play. Add TV timeouts and a 60 minute clock takes over 3 hours to run. The British don't like that. They like sports with few stoppages.

There are British fans, and NFL games are broadcast in England and get decent ratings. But if the NFL really wants to expand, they need to look beyond places that speak English. They need to go to Germany.

Germany was the only place where NFL Europe enjoyed any measure of success. Germany has already produced NFL talent. Germans don't have much rugby. Culturally speaking, Germans would like the start-stop format of NFL games. Their national soccer team is usually best at set-piece plays that are pre-planned. Germany has already embraced North American sports like basketball and hockey. They have no anti-US bias in what sports they follow. They already have a 14 team pro league in Germany.

Maybe the NFL should consider playing a game in Berlin or Munich (Oktoberfest) or in the Rhine-Ruhr region. Germans are very large people, they love sports and physical fitness, they love beer, and they love organized violence. Football is designed for Germany. 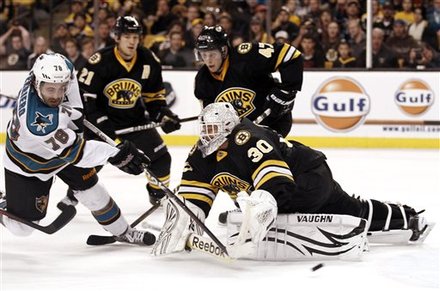 The good news is that the mistakes that the Bruins made are easily fixed. That's also what makes them so frustrating to watch. San Jose came into Boston after playing 65 minutes in New Jersey the night before. The Bruins should have tried to grind a game out, play mistake free, and hope to outplay and outwork the Sharks in the 3rd. Instead, they made some stupid mistakes (especially David Krejci) early on and were playing catch-up hockey most of the night.

Pavelski's goal 72 seconds into the game was assisted by Joe Thornton, but Krejci deserved the second assist. He surrendered the puck in the Neutral Zone with a careless pass that had no chance of not being a turnover.

San Jose's second goal came when Krejci didn't cover the slot in front of Thomas. Instead, he kind of joined a 2-on-2 scrum for the puck on the boards behind the net (I say "kind of" because he didn't really do anything to help the two Bruins defensemen engaged). This left Logan Couture uncovered in front, and when the Sharks won the board battle, Couture made the Bruins pay for Krejci's absentmindedness.

I criticize Krejci for not being much of a scorer. The playoffs silenced that critique. But he's praised for his puck-possession skills. Turnovers and defensive mistakes are acceptable realities for guys who can score 40 goals. For someone who struggles to reach 20 goals, and who is supposed to do the smart, little things, Krejci's mistakes were intolerable.

He's -5 on the season and that's one of the reasons he's been taken off the top line. He's better than this. He'll play better.

The Bruins' play improved in the late parts of the 2nd and scored twice in the 3rd. Lucic's goal was pure effort and muscle. Seguin's goal was a bit cleaner, but still assisted by the strength of Lucic and Kelly. I'm liking the Lucic-Kelly-Seguin line.

But the Sharks got the game-winner thanks to a faceoff win, some food forechecking, and a bit of indecisiveness from Steve Kampfer.

We saw this routine last year. We even saw it a few times in the playoffs. The Bruins fell behind to Montreal and Vancouver because they didn't take care of the puck. This team can play better than this and I'm sure within the remaining 74 games, they will.

Big game Thursday as the Habs come to town. Montreal is 1-4-2 and this is a good chance to keep a divisional foe down.