The Red Sox have played their first 62 games, going 33-29. The start of the season is officially over. These are the dog days. They will soon be followed by the make-or-break days of late August and September.

In order for the Red Sox to even have a shot at making the playoffs, either through the division or the wild card, they'll need to win at least 90 games. This means going 57-43 over the next 100. Realistically, they'll need to win more than 95 games to have a good shot at a playoff spot. This means a 62-38 clip for the last 100. In order to assure themselves a playoff spot, the Sox will need to win 100 games. This would require a 67-33 pace. This team is capable of all these things. They're also capable of going 50-50.

The way I figure it, the Red Sox should be able to win up to 73 of these games. That is what I say their maximum would be.

1975 WORLD SERIES REMATCH
The last time the Reds were at Fenway was Game 7 of the 1975 World Series. It is amazing how little attention this game gets. It seems like everyone knows everything about Game 6, but few people know that this game was pretty painful. The Sox got to Cincinatti starter Don Gullett for 3 in the 3rd inning. However, much like Game 7 of the 2003 ALCS, the Sox couldn't add to their lead against their opponent's bullpen and their opponent was able to gradually chip away. Tony Perez hit a 2 run shot off Bill Lee in the 6th. Roger Moret releived Lee in the 7th, allowing a hit and 2 walks in only 0.1 IP. After 7, the game was tied 3-3. Ken Griffey walked in the 9th, got sacrificed to 2nd, and then moved to 3rd on a groundout. Pete Rose was walked but Joe Morgan got an RBI basehit to give the Reds a 4-3 lead. The Red Sox went down in order in the 9th to end the game and the series, losing both 4-3. This game seems as painful as the 1978 playoff, or 2003's game 7, yet it doesn't get any publicity.

Here's a weird thing about the interleague schedule this year. Every team the Red Sox have played, except Atlanta, have been World Series opponents in the past. The Sox played the Cardinals in 1946, 1967, and 2004. They played the Cubs in 1918. They played Cincinatti in 1975. They played Pittsburgh in 1903. They played Philadelphia in1915.

The Red Sox should win the first two games with ease as both pitchers have ERAs above 7. Plus, Clement has pitched well except for his last start and Wells has been the ace of the staff lately. The final game should be difficult. If Arroyo gets back to where he was in April, it should be a fine pitcher's duel. Harang is perhaps their best pitcher. Plus, he's the type of young pitcher that domiantes us for some reason. I think we'll win the first two with ease, then lose a close one to end the series.

THE LINEUP LAST NIGHT
During the ESPN broadcast, Joe Morgan was whining and complaining about the Red Sox using 4 non-starters in the lineup last night. If you ask me, these replacements weren't that bad to use. Mueller hasn't had a day off in a while despite coming off knee surgeries and Youkilis has shown he can hit. Ortiz isn't exactly a great first baseman and Millar has a .417 average against Rusch and being in an NL ballpark, Francona could only use 1 of them. Then Payton plays for Nixon against the lefthander Glendon Rusch. Finally, Mirabelli returns to his role as backup catcher. I know I've given Francona flak for replacing people in the lineup but none of these moves really bothers me. And look at the results. Combined they went 9 for 18 with 6 singles, a double and a homerun. They scored 5 of the Red Sox 8 runs.

WE STILL HAVE THE PATRIOTS 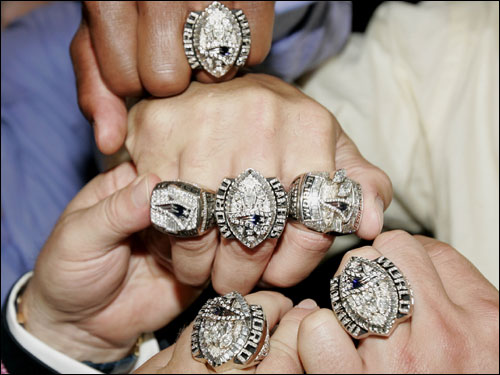 As bad as this roadtrip was, it easily could have been worse. This was the first time in a long time that Wakefield has looked this good. Hopefully he'll be able to go on a tear like he has in years past.

A few good things that it was nice seeing, apart from a solid Wakefield:

Johnny Damon hit for power with a double and a homer. Last year he had 20 homeruns and this year he only had 2 going into the 62nd game.

Kevin Youkilis getting some playing time. He went 3 for 5 with his first homer and a double. Good to see the arm hasn't been affected by Reyes...yet.

Good to see Kevin Millar not looking like a fool.

Seeing Manny Ramirez hit a homerun after a long drought.

Doug Mirabelli back on the team. He is an improvement over Wooten and Shoppach and he allows Varitek to stay fresh.

Seeing the bullpen go 2 scoreless innings allowing only one hit.

The Man of the Game is Wakefield who went 7, allowed only a run and only 4 hits. He went 1 for 4 at the plate with an RBI. He didn't walk anybody and only threw 86 pitches. Had the score been tighter, he probably could have gone 9.

Interleague play continues as the Sox host the Reds and Pirates. They should win 5 of these games. They should be doing alot of things though.
Posted by rob at 12:09 AM No comments: