Why There Will Never Be an NFL Team in London 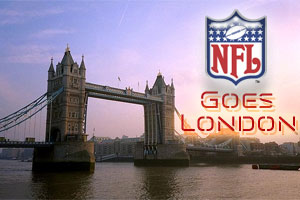 There hasn't been much talk about the NFL moving a team to London this week, but it's always been a topic of discussion when this game is played. There will never be an American football team based in London and here's why:

There's also the considerable jet lag teams would suffer flying to and from Britain. Because of this, the London team itself would probably have the best home-field advantage in the NFL. And would struggle the most on the road. Especially West Coast games. San Diego is 5,500 miles and 8 time zones from London.

Lack of Rivals
The Packers have the Bears, the Giants have the Eagles. The Patriots have the Jets. Who would be London's rival? The Patriots would be closest, at about 3,200 miles. And Washington was burned by the British in 1814. Somehow I don't think much animosity has carried into the 21st century.

Exchange Rate
Due to the cap, players in London would get paid the same amount as their counterparts in the States. Due to the exchange rate, their money would be worth less. $100 equals £62.23. And something that costs £100 costs $161. So players would effectively have less money to spend on houses, cars, strippers, et cetera. So if Darnell Dockett wanted to tweet a picture of $100k, it'd be £62,230 in British notes.

Brits Don't Like the Game
They prefer rugby for a physical sport. And of course soccer is king. While most Americans view soccer as boring and devoid of action, the Brits like that it doesn't pause (how many pauses are in a football game? well over a hundred), and the game can change in an instant. Scoring is rare in soccer, which makes it tense, and one goal could decide the game. Many Brits see our football as slow, hiccuping action, and they don't like the pads.

Having an NFL team in London would be like having a hockey team in the Arizona desert. Thankfully, the NFL isn't as dumb as the NHL.