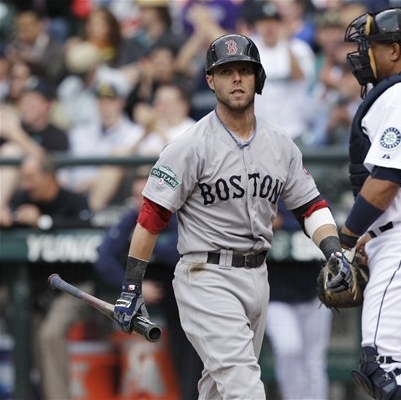 The Mariners suck. The Red Sox split a 4 game series with a team that sucks. By itself, that's not a big deal. But considering the inconsistency the Sox have displayed this season, it's another frustrating weekend. The Sox don't take advantage of the opportunities they have.

They got good pitching performances all weekend. Then again, the Mariners really do suck. I'm surprised they're not no-hit once a week.

Felix Doubront Doubront labored yesterday, but the bullpen was able give the Sox a chance. On Saturday, Beckett went 6 innings and allowed 2 runs in his return from "injury." On Friday, Aaron Cook only needed 81 pitches to go 9 innings. That's 9 pitches an inning for those of you who forgot your multiplication tables. Not a single pitch he threw was swung on and missed. That's ludicrous.

But the Red Sox didn't generate much offense themselves. 9 runs in 4 games. 9 runs in 39 innings. The Red Sox seemingly forgot how to get hits with runners in scoring position. An inconsistency which has plagued them all year. And last September.

On the bright side, the Sox are half a game out of the Wild Card. And the Orioles are falling from the sky.

But to be a true contender, they have to take advantage of their opportunities. They had a 4 game series against one of the worst teams in the American League and they split 2-2. It's not a disaster, but it's hardly worth celebrating.