Brady Beats Manning... What Else Is New 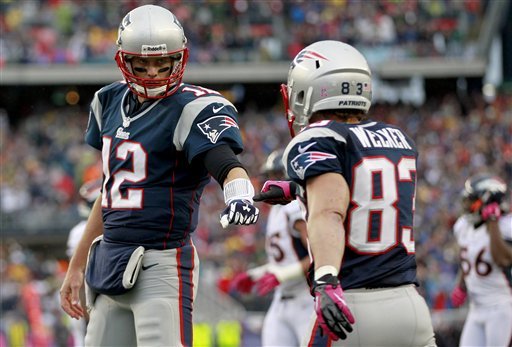 Tom Brady improved to 9-4 in his career against Peyton Manning. Although like many of those famous victories in 2003 and 2004, the Patriots beat Manning as a team.

The Pats put up some collegiate style stats. They rushed for 251 yards on 54 carries. They only threw the ball 31 times. They ran 89 plays. At times it reminded me of watching Clemson, or especially Oregon. High-paced, quick-snapping, no-huddle offense. It doesn't work all the time, but it worked against Denver.

Wes Welker had another Wes Welker kind of day. 8 receptions, 104 yards, his first TD of the season. I think the best thing to happen to this offense was the injury to Julian Edelman. Welker's talents were being wasted as a third/fourth option. After the game he jokingly remarked that it was nice to "Stick it in Bill's face."

There are a number of things Wes Welker can't do. But only Wes Welker can do what Wes Welker does. He gets open in a instant, he's slippery, he's a compact target to tackle, he's durable. He's like a small pickup truck with a turbo-charged engine.

This game turned on some big 3rd and long conversions, along with some Denver mistakes. In other words, there's room for improvement. And that's not me being pessimistic, it's me being optimistic. This team has potential to be amazing if they can put 60 good minutes together.

Defensively, there were some lapses, also some big plays allowed. The forced fumbles were pivotal. And Alfonzo Dennard looked pretty good in his first ever NFL game. As always for this unit, it was a mixed bag.

Offensively, my only complaint is that for one drive in the 4th the Pats went away from the run, which had been working so well. It was as if Josh McDaniels wanted to drive the stake into Denver with a few big pass plays, instead of continuing to slowly torture them.

And I don't mind the 4th & 5 attempt. I do think that if you intend to go for it on 4th & 5, why not run on 3rd & 5? It'd been working all day. But up by as many as they were, I have no problem with the Patriots being aggressive in that part of the field.

The Pats aren't perfect. No team in the NFL is. The Patriots have a defense that surrenders big plays and makes big plays. They have an offense that can beat you in a multitude of ways. So long as they do their job and execute, the only team that can truly beat the Patriots is the Patriots.

Pats at Seahawks next Sunday.