HOW HAPPY MUST DERRICK BURGESS BE RIGHT NOW? 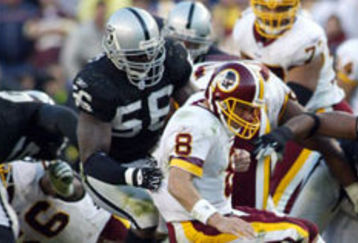 You go from the Black Hole of Oakland to the sunshine of Foxborough. The Pats won 11 games last year. The Raiders have won 11 games in the last 3 years.

The Patriots traded a 3rd round pick in the 2010 draft, as well as a 5th rounder in the 2011 draft, for 2 time Pro Bowler Derrick Burgess. Burgess played at defensive end for the Raiders, but the Pats will most definitely use him as an OLB (he only weighs 260 lbs).

He won't start, but he can provide a nice pass rush off the edge on certain downs. He'll relieve Pierre Woods, with Adalius on the opposite side. I'm not a big Pierre Woods fan, so I love this deal. The less time Woods has on the field to mishandle potential fumbles, the better.

With an inexperienced secondary, the Pats needed more of a pass rushing threat, and Burgess is it. He only had 3.5 sacks in 10 games last year, but from '05 to '07 he amassed 35 sacks.

In more good news, Brady practiced without a knee brace on Thursday.

I don't gamble, at least not on sports. But Wednesday night, I seriously contemplated emptying my bank account, finding a bookie, and betting everything on the Yankees to win. John Smoltz vs. Joba Chamberlain. A struggling and injured Sox team against a soaring and healthy Yankees squad. I would've cleaned up.

It's a good thing the Red Sox acquired Paul Byrd, because John Smoltz' tenure as a starter looks to be nearing an end. He can still be an asset in the bullpen (the Sox could use some help out there, as well). He's failed at one of the fundamental things ALL starting pitchers must do: retire batters more than once.

And remember when people thought the Sox had enough pitching for a 6 man rotation?

And all the amateur sports psychologists who are attributing the last two losses to that 13 inning debacle Tuesday night, get a clue. The Sox put Brad Penny, then John Smoltz on the mound against good lineups and they were lit up. End of story.

The good news is that Josh Beckett pitches Friday night, against AJ Burnett.

Photo Credit:
AP Photo/Frank Franklin II
Posted by rob at 1:54 AM No comments: