PEDRO TO PITCH IN GAME 2

Pedro Martinez, a.k.a. God, will take the mound for the Phillies in Game 2.

I'm not gonna lie, I've been having difficulties deciding who to root for in this World Series. On the one hand, I hate the Yankees more than almost anything in the world. On the other hand, does the world really need arrogant Philadelphia fans? Yeah, they've already won, but if they win back-to-back, then they're legit. And is that something we really want? Yankee fans are already cocky, win or lose.

But thankfully, the Phillies have Pedro, and that more than tips the balance in their favor.


On the eve of the Celtics' 2009-2010 "Reclaim What's Ours" Campaign, Glen Davis decided to keep it real. He was out Saturday night and early Sunday morning, with a friend. Then his friend said something about Davis' girlfriend. Davis and his friend kept it real, fought for 15 to 20 minutes, then cooled down and continued to hang out. Except Davis broke his thumb in the altercation. And now he's out for a few months.

Way to keep it real, Big Baby. And way to live up to your nickname. That blank banner, just begging to be dressed with letters and numbers, adorns the Celtics' practice facility in Waltham. It both sums up the ultimate shortcomings of last season as well as the hope for this upcoming campaign.

The Celtics have something in 2009-10 that they lacked in 07-08: depth. Oh yeah, and a point guard. Rajon Rondo matured into a near-elite level PG last season, averaging 8.2 assists and 11.9 points per game. Compare that to the Championship year when he was 5.1 and 10.6 in those categories. 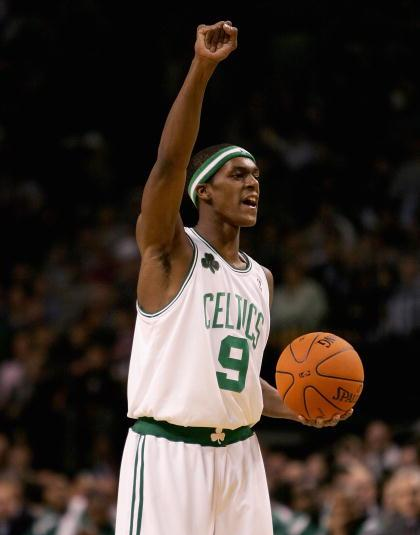 Marquis Daniels backs up Ray Allen at the other guard spot. I'm not a huge Ray Allen fan, and I think he's lost more than a step. He's also been inconsistent in big games, occasionally busting open with 25 points, and sometimes holding himself to less than 8. Daniels can eat up a lot of minutes, allowing Allen to keep his legs energized.

Rasheed Wallace is another starter-turned-backup that will play in support of a guy who needs extra rest. Last year when the starters went out, this team struggled big time to stay above water. With Daniels and Wallace, they might even be able to extend leads when they sit KG, Pierce, and Ray Ray.

Kevin Garnett is the X factor. It's a long season, and I wouldn't have minded if they kept him off the roster for the first month of it. He's got to be 90% or better for the Celtics to have a chance at Banner #18.

The C's should win the Atlantic Division with ease. Last year they beat the 76ers by 21 games. What really matters will be the playoffs. That's where I think Rondo, Daniels, and Wallace will have their biggest impact.

I think the Celtics go to the NBA Finals, before losing in a tight series against the Lakers. Hopefully I'm right about the finals berth and wrong about the victor.