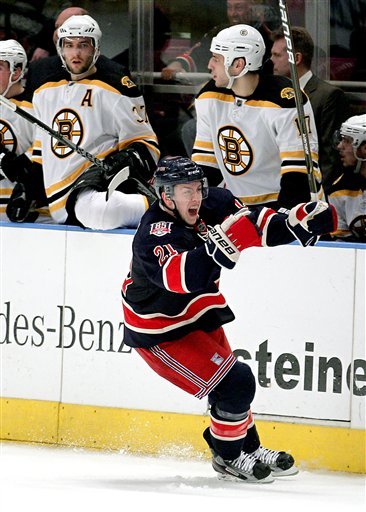 The Bruins took a 3-0 lead, taking advantage of a worn out Rangers team. Then McQuaid makes a mistake, and it's 3-1. Then more defensive lapses, and it's 3-2. But the penalty killing unit seems to sap New York's momentum, and the Bruins get back to sensible hockey.

Then comes the 3rd period. The exhausted Rangers summon their final ounces of energy, and pressure the Bruins. As we've seen again and again, the Bruins failed to put away a desperate team.

McQuaid and Kaberle made the two most glaring defensive mistakes. Both of them assumed their teammates would win a battle, and moved to positions to receive a pass. Instead, their teammates lost their battles, and dangerous amounts of space was opened up. McQuaid surrendered the middle of the ice on Vaclav Prospal's first goal. And Kaberle left the crease open, giving Brandon Dubinsky all the time and space he needed to deke out Thomas.

In the defensive zone, you can't assume your teammates are going to win the puck. You have to react and play DEFENSIVELY. Weird concept, eh?

There were also numerous defensive shortcomings by Andrew Ference. I'd rather see Hnidy out there. I'm tired of watching Ference lose battles. Kaberle isn't much of a defensive defenseman either, but at least he can pass and score.

And the game-winning goal came when the Bruins collapsed into the slot. But none of them took a body. They tried fishing for the puck. Which is exactly what the Rangers did to allow Horton's goal in the 1st. In that type of frantic situation, you have to tie up your opponents' stick. The puck will randomly bounce around, but at least if it finds your opponents' stick, they won't be able to do anything with it.

Statistically, the Bruins are one of the best defensive teams in the NHL. 4th fewest goals allowed. But in tough situations in big games, they make so many inexcusable defensive errors. Claude Julien might have implemented a masterful defensive plan in Boston, but it relies too much on the opponent playing predictable, traditional, station-to-station hockey. In other words, not the brand of hockey you see in the playoffs.

The Bruins finish the season against some non-contending teams. It's a good chance to give Thomas a break, and to play guys like Seguin and Kampfer. B's host the Islanders Wednesday night.