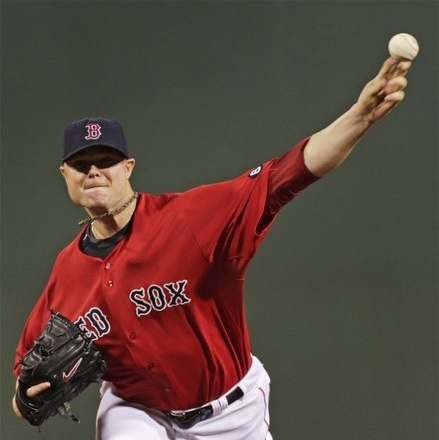 The Red Sox lost yet another series, dropping 2 of 3 to the Orioles. What irks me is Friday night' 4-2 loss. Not for the loss itself. I mean, who cares at this point? It's because Bobby Valentine seems devastated that poor Jon Lester wouldn't get win #10.

When being interviewed/psychoanalyzed by WEEI, Bobby V defended his pinch hitting of Julio Iglesias mid-at-bat because he was dead-set on helping Jon Lester get a win, and hopefully finish .500, and therefore have more confidence for 2013.

I'm sorry, but if Lester's confidence depends on him having a .500+ record, then he's not worth a jersey.

The problem isn't Lester, though, it's Valentine. Bobby V will run this team in twisted, perverted ways until he is dismissed. He'll try his damnedest to get Jon Lester a few wins, but if Jon Lester wants to, he can be a man, admit he's had a shitty year, and try to make 2013 better. To me, that builds more confidence then ending the year 12-12 with an ERA hovering near 5.00.

Bobby Valentine doesn't understand this. Because Bobby V has never experienced actual confidence before, only a facade of ego and an array of apparent self-satisfaction that made him seem confident.

The season is almost over though, and hopefully the reign of Bobby Valentine is just as close to ending.

Why the NFL Referee Lockout Needs to End 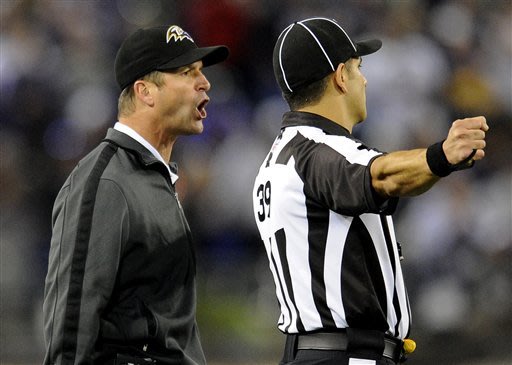 Well, we all saw last night's debacle. I'm not going to blame refs for a Patriots loss. Because the refs sucked both ways. The main point is, they suck in general.

My favorite Ref Lockout moment was when the officials called a timeout to measure a ball that was over a yard from the 1st down line. The time it took to do so allowed John Harbaugh's staff ample time to view every single replay and then decide to challenge the spot of the ball.

Of course, the replacement refs got the spot horribly wrong to begin with. Harbaugh was right and the spot was wrong. Qualified officials wouldn't have made the mistake that started all this.

I understand the NFL's position in this dispute. We'll all watch the NFL next week, even though the refs suck and might be affecting the game. So if the NFL isn't losing money, why should it pay money to retain properly trained officials?

The NFL might not be losing money, but these games are losing legitimacy.

And at some point, the loss of legitimacy will affect the number of people watching the sport. See: Black Sox Scandal in 1919. It might take a long time, but it will happen. In 1919 baseball was as popular in this country as football is now. And it was facing a legitimacy crisis because some Chicago White Sox players took money to throw the World Series. Baseball was king but even it was threatened by a loss of legitimacy.

And how long can owners of Super Bowl contenders tolerate the shoddiness of officiating? Bill Belichick has already grabbed an official and will likely be (justifiably so) disciplined for it. How long until Robert Kraft lobbies for a settlement with refs to avoid further rankling?

I have never seen Bill Belichick so enraged as he was during that game last night.

Oh and don't forget these games are taking longer, and that's a problem for TV networks and their ratings. So these poor officials might be having a financial impact on the game after all.

The ultimate consideration for me is legitimacy. So many Patriots fans will be griping about the refs this week. I disagree with them and think the Pats are the most responsible for their defeat, but the lack of legitimate refs has resulted in the lack of legitimate wins. So whoever does well this season won't receive proper and just praise, because people will blame the low-rent refs for dictating who won and who lost in the 2012 NFL.
Posted by rob at 11:00 AM 1 comment: 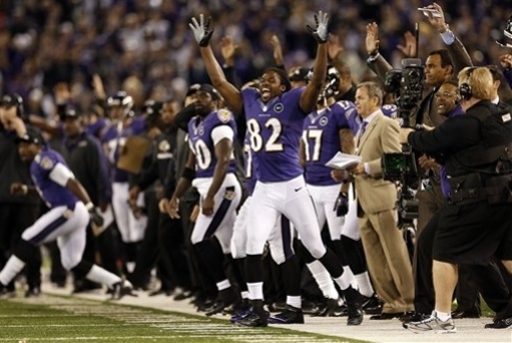 Regardless of whether or not that field goal was good, and despite the amateurish officiating that seemed to define the game, the Patriots are the most responsible for their loss to Baltimore last night.

The Patriots offense had so many chances to end this game. And they didn't execute. When the Pats' defense stopped the Ravens on 4th & 1, the offense didn't do much. They were up by 9, with about 10 minutes left, and a chance to make it a 16 point game. Or even a 12 point game. 6 plays and 3:21 later and Baltimore had the ball back.

And the drive before that, the Patriots drove to the Baltimore 2, and only managed a field goal.

The Patriots made 5 trips to the Red Zone and only managed 3 touchdowns.

There were other missed opportunities. Joe Flacco should have been picked off 3 times, not just once. Devin McCourty bungled those. He was also burnt more than an Irishman's skin in the Sahara with no sunscreen. I don't know how such horrific burns don't appear on the injury report.

The play-calling last night was, at times, infuriating. The direct-snap to Danny Woodhead, then end-around to Julian Edelman was one of the most enraging moments of my life. It's 2nd & 6, you're moving the ball with traditional plays, so you open up Boise State's playbook, and get all cute and clever? Why?

The Ravens had been penetrating into the backfield all night until that point, and McDaniels/Belichick/Brady gave them a chance to blow up a play and end a drive.

I get the feeling with this offense that they're trying to win a certain way, instead of just trying to win any way possible. These tricks and gadgets are for the Bad News Bears or for the softball team from Camp Misfit when the super-athletes from across the lake come to play them.

If you think you need to try these tricky type of plays in order to win, then you don't have faith in your offense to simply execute the simple.

In that drive, the Patriots already tried an end-around and got a 1st down out of it. So Baltimore was already keenly aware of such a possibility. More traditional plays had been working, so why risk a big loss on 2nd & 6?

Sometimes you can think yourself so smart that you do stupid things and don't even notice it.

Anyway, I'll talk about the refs in a separate post, because it's a big enough issue in and of itself. The refs didn't cause the Patriots to lose, the Patriots caused this loss themselves. Although it's strange how Rob Gronkowski gets called for holding at least once a game. Are these all these replacement refs related to Bibi Jones or something?

Anyway, the Patriots should have won the last 2 games and didn't. That's good news/bad news. The good news is this team has talent enough to be 3-0. The bad news is, they haven't demonstrated an ability to consistently turn that talent into victory. They haven't executed, and consequently they'e 1-2, and below .500 for the first time in 145 games.

And you know what, you can't help but feel sentimental for Torrey Smith. He had a brilliant game only a few hours after tragedy completely changed his life. Logos and jerseys aside, I'm glad he had a good game.

The Pats are in Buffalo next Sunday. The Bills, along with the Jets, are ahead of the Patriots in the AFC East standings. I just puked in my mouth.