"We play like this the rest of the season, we're going to win the championship."
-Bobby V

Why does he feel the need to say such things? I like confidence and optimism, but why declare it so brashly through the media? Does he truly have no filter?

The rest of the quote confused me almost as much.

"I am so proud of this group of guys. I know it's an overstated line, but those men played 20 days of hard baseball, hard travel, hard competition . . . [there] were weather factors, injury factors."

Okay, the injury thing is fine. And the 20 games in 20 days is only a moderately annoying complaint. But hard travel? The Sox went from Fenway to Kansas City then to Fenway then to Florida then to Philly then to Baltimore. Where is the hard travel?

Those road trips to Kansas City can be brutal. Have you seen how much barbecue Josh Beckett can put away?

And weather factors? I know there were some chilly, drizzly days at Fenway this past month, but this is New England. How difficult will the weather be in September if Valentine thinks it was rough in May?

I don't like quotes like this. They're distracting. They lead to a lack of focus. And now the media has ammunition to ask Sox players about championships.

Valentine's words also feed into the cocky, entitled attitude the Sox have had for a few years now. The title is theirs if they want it. Unless, of course, weather factors and hard travel gets in the way.

Whatever happened to coaches saying "we're going to take it one game at a time?"

Are the Rangers Choking? 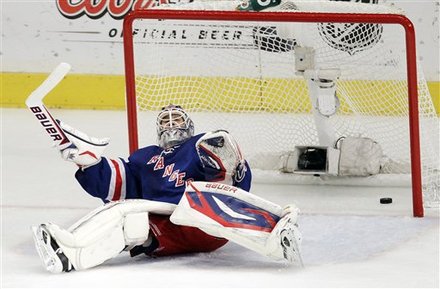 I thought the Rangers were a strong candidate to win the Cup this year because they reminded me so much of last year's Bruins. They had a brilliant goalie, a sound defensive system, and could get goals from multiple guys on various lines.

But a defensive system only works if its followed. If players don't do what they're supposed to do, if they're not where they supposed to be, the system breaks down and fails.

New Jersey scored their first goal when Ranger defensemen Stu Bickel left the front of the net and Stephen Gionta knocked a rebound past Lundqvist. A pinching Ranger defensemen eventually resulted in New Jersey's second goal. The Devils' third goal came when Ryan McDonagh made a desperate pinch, didn't get to the puck in time, the Devil's went up ice and Travis Zajac scored. It was a soft goal for Lundqvist to allow.

New York eventually tied it up. Thanks mostly to lucky bounces and Martin Brodeur losing a puck in his skates (as he tends to do from time to time). But another defensive miscue, this time by winger Carl Hagelin, led to New Jersey's winning goal in the 3rd. Ryan Carter was left all alone as Hagelin was focusing on a 2-on-2 puck battle along the boards and not on the dangerous central area of the ice. Carter went to that area, the Devils won the puck battle, and Carter scored.

The Rangers seem to have forgotten how they won 51 games and 2 playoff series. And when they were down 2-0 with 50 minutes of hockey left to play, they started getting desperate and impatient. New Jersey took advantage.

Then there's a guy like Gaborik, who technically scored last night but that goal was a result of Brodeur kicking the puck into his own net. Apart from that gift, Gaborik hasn't scored a point in this series. He had 3 goals and 4 assists against Washington. The Rangers need their 40+ goal scorer to score. Or at least help others to do so.

Give credit to New Jersey, though. They've played true to themselves. They know who they are and they're doing what they're good at. Their best players are playing their best. And now they're only one win away from the Cup Finals. 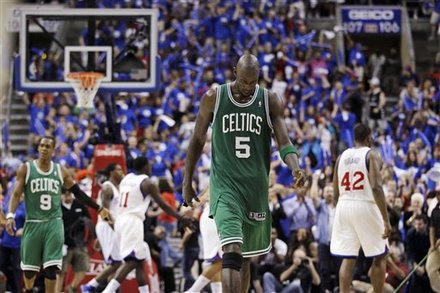 If the Celtics lose this series, they really can't blame anyone but themselves. There was that collapse in Game 4, then this abomination. I'm sure some will point to injuries, but the 76ers just aren't that good. The Celtics played like crap last night and still had a shot to win the game.

Last night they also turned the ball over 17 times. And these were mostly unforced, stupid, careless decisions.

They were dominated in the paint. The 76ers scored 42 of their 82 in the paint. The Celtics only scored 16 points down low. They did, however, get to the free throw line. Which allowed them to stay close until the 4th quarter. The Celtics also did a good job rebounding the ball. 48-37 in their favor. Including 14 offensive rebounds. If they had shot better, they really could have taken full advantage of those extra opportunities.

The win was there for the Celtics to take. They just didn't grab it.

Ray Allen looked hurt. He had trouble keeping up on defense, and he can't shoot. I don't want to see much of him in Game 7. It's not his fault, but he's more of a liability than an asset. It looks like Bradley will miss Game 7, so maybe Allen will have to play. I just don't want to see him playing a pivotal role, offensively or defensively.

Pierce and Garnett combined for 44 of the Celtics' points. Apart from those two, the Celtics hit only 12 field goals, and shot 25.5%. That's absolutely, inexcusably horrific. Bass was 2 for 12, Rondo was 4 of 14. The Celtics missed layups, jump shots, everything.

This team does stuff like this. They can beat an opponent with ease, then they make things difficult for themselves. They crushed Atlanta one night, then lost their next game to them. They've crushed Philly twice in this series, then lost both follow-up games.

Game 7 Saturday evening or night, depending on what happens in Indiana tonight.