IF LA BUILDS IT, WILL THE NFL COME? Los Angeles' City Council approved a plan for a privately funded $1.2 billion football stadium to be built adjacent to the Staples Center. The stadium would seat 70,000 and would likely be completed by 2016. The planners still need to endure the environmental permit procedure. And of course, they need a team.

It's ridiculous that there's no NFL football in LA, and hasn't been for 17 years. It's the second largest media market in the country.

Then again, it's not like the people of LA don't watch NFL football on the television. And the NFL does get most of its revenues from TV. One of the problems with LA is that fans don't show up unless the team is winning. Not just competitive. The team has to be good enough so that it becomes the cool thing for people to do.

There are candidates to go West. The Vikings, who have stadium issues and would ironically be following in the Lakers' foot-steps. The Bills. The Jaguars. I think it should be the Jags. It's kind of silly to have a pro sports team in Jacksonville. The Jaguars are a decently competitive team that can't fill its own stadium.

You have to move a team that can make the playoffs out to LA. The Bills would become the Clippers if they go to California. The Vikings or Jaguars would at least generate some excitement.

When Texas decided to stay in the Big XII, the conference seemed like it had been saved from being carved up by the SEC, BigTen, and Pac-10. But they're still vulnerable. Texas A&M might be leaving the 10 team Big XII.

On August 22, A&M's regents board will decide the fate of the historic football program.

To be honest, I can understand why A&M might want to do this. Part of the reason U-Texas decided to remain in the Big XII was because it would be receiving a lion's share of revenues. Texas is the king of the Big XII, which is becoming an ever smaller kingdom. A&M could move east to the SEC, where the throne is contested, and they'd be treated as an equal.

And the Big XII can survive without A&M. Frankly, they let TCU slip through their fingers. The Frogs would have been a perfect addition to the conference, joining the 4 other Texas based programs of the Big XII.

And if A&M goes to the SEC, does the SEC kick someone out? Vanderbilt, perhaps? Mississippi State? There's also rumors of Florida State joining the SEC, which could force the ACC to add a team. The musical chairs in college football continues.
Posted by rob at 10:45 AM No comments:

THE RETURN OF FOOTBALL 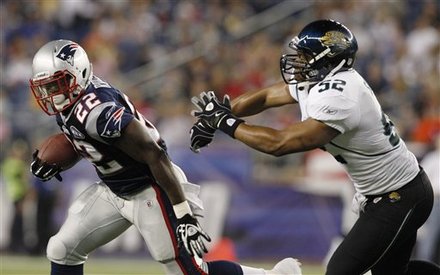 I have to admit, I've never been more excited for a pre-season opener than I was last night. Maybe because just a month ago, we had no idea if this game would even be played.

Then the game started and reality sunk in. This is the first game of the pre-season and it doesn't matter much. Brady didn't play a snap, neither did Welker, Branch, Ochocinco, Wilfork, McCourty, Mayo. This was a game to evaluate other players. As Belichick said after "We didn’t rest anybody. There were players that we wanted to see play, and we looked at them and we let them play."

Some did well, some didn't. Taylor Price caught 5 passes for 105 yards and a touchdown. He's been having a very good training camp and looks to have the inside track for the 4th spot on the WR depth chart.

Andover, MA native and utility man Buddy Farnham made an interception. He's listed as a receiver, but he's one of those guys that can do multiple things. Will he make the team? That might be tough, but he's definitely in that Belichick mold.

Darius Butler and Jonathan Wilhite were both heavily evaluated last night, playing deep into the 4th quarter. That's not a good sign for either guy. Neither played well, neither has played well in their tenure in Foxborough, and I wouldn't be shocked if one of these guys gets cut before the regular season started.

Aaron Hernandez caught 6 passes but wound up fumbling twice. That's not a good way for him to get playing time in the future, considering he has Gronkowski to compete with.

Overall, it was the Jaguars, it was pre-season. We already know the Patriots have a pretty good team. Some of the details have to be figured out by the coaches, such as the #4 WR spot, such as what to do with Butler and Wilhite.

But wasn't it nice to see some football, after an off-season that was more about legal proceedings than the game?

Pre-season game #2 is next Thursday night at Tampa Bay.

Photo Credit:
AP Photo
Posted by rob at 9:45 AM No comments: