Change for the BCS?

The SEC wants a playoff. Ironic considering how much they've thrived in current BCS format.

The ACC also wants a playoff.

The Big Ten doesn't. Big Ten Commissioner Jim Delaney is adamant that there be no playoff. He also believes that the world is flat and that the earth is the center of the Universe.

The Big XII might want a playoff after seeing Oklahoma State lose 1 game and go to the Fiesta Bowl.

As a demonstration of how messy this discussion is, nobody involved even uses the word "playoff" because it's too inflammatory. "Plus-one" is the term to describe a 4 team playoff. Which makes no sense because there'd be 2 rounds, 3 games, and 4 teams.

Call me cynical, but I don't think there will be any major change from these meetings. Maybe the BCS will only sanction the national title game, instead of the title game and 4 BCS bowls. Maybe the notion of automatic qualification will go out the window, which might stop the musical chairs we've seen in college football.

But there are too many uncompromising people, too many various deal-breaking demands for everyone to be satisfied. And without consensus, there will be no big changes.

Until Jim Delaney dies or gets fired, there won't be any significantly positive change to college football's postseason.

Or maybe, if the BCS does separate itself from the bowls, it might grow as an independent entity. It might eventually build its own playoff system. Just like the NIT. Only with no NCAA tournament to compete with. Think of how popular the NIT would be if it were the only postseason tournament and featured all the best teams. ESPN would pay billions to broadcast a football version of that. And where the TV money goes, the teams will play.

That might make the Orange Bowl less profitable, but I really don't care.

B's Back to Business 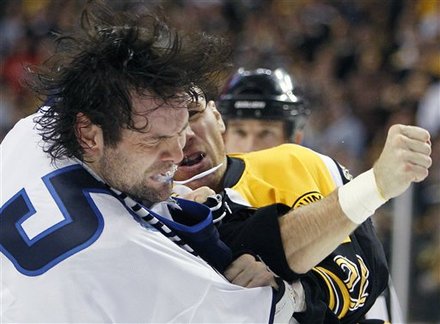 Krejci is hotter than hot right now. He won 11 of 13 faceoffs, and his 2 assists were highlight reel passes. We really saw a good display of the top line's strengths last night. Krejci's vision and passing, Lucic's skating and drive, and Horton's point blank finishing touch. Krejci has 5 goals and 9 assists in his last 9 games. Horton's scored 5 goals in his last 4 games.

One thing that cost the Bruins on Saturday was lack of a power play goal. They got a timely one from Pouliot last night that sealed the victory. Shawn Thornton also scored on a penalty shot. Yes, that sentence was just written.

Rask was brilliant again. He allowed 3 goals, but all 3 were deflected. And he made some huge, very timely stops in the first 40 minutes of the game.

Speaking of which, the Bruins had their share of sloppiness in this one. Giveaways, not taking care of the puck, and it cost them a few goals. Corvo's intercepted pass was the most blatant. But Rask prevented Winnipeg from flying away (pun intended) with a big lead. And in the 3rd period, the Bruins played like a team determined to win.

Back to Corvo, I'm still waiting to find a reason to like this guy. I don't hate him. There just isn't much to like about him yet. He hasn't contributed much to the offense, which was something he was expected to do. And in my opinion, he's the 6th best defenseman. He's 4th in time on ice, but I'd much rather have Ference's stability or Mcquaid's physicality out on the ice.

Anyway, Corvo isn't costing the team much. And he's not struggling. He just hasn't impressed me yet. He's not Dennis Widemen. And he's certainly not Tomas Kaberle.

The Bruins are back on track, and they end their homestand Thursday when the Canadiens come to town. Montreal are struggling. There was a fight a few days ago in practice between PK Subban and Tomas Plekanec. The team has lost 8 of 11. And their fans' biggest concern is that their interim head coach can't speak French. Nice priorities, Montreal.