NOMAR'S BACK WITH THE SOX

In a very weird maneuvre, the Red Sox signed Nomar Garciaparra to a minor league deal, then he retired. The ex-Sox star said “I’ve always had a recurring dream, it was to be able to retire in a Red Sox uniform.” It's funny how that dream's importance diminished when the Sox offered him a 4 year, $60 million deal before the 2004 season.

After inking the minor league deal, Nomar announced his retirement, and declared his intention to work as a baseball analyst for ESPN. This brings Mr. Garciaparra full circle, as he was as vehemently anti-media as a player.

Red Sox CEO stated “When the history of the Boston Red Sox is written again, there will be a very large and important chapter devoted to Nomar Garciaparra.” Yes, Nomar played a key part in Red Sox history. After all, it was his departure which triggered the Sox' World Series run in '04.

I can just see the PR/merchandise machine that is the Red Sox Front Office deciding to retire #5 in a few seasons. 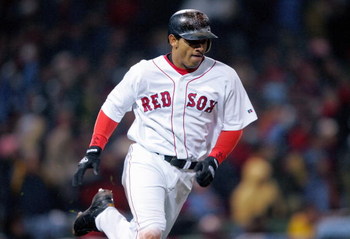 WHY MESS WITH A PERFECT THING? PLEASE DON'T EXPAND THE NCAA TOURNAMENT

The NCAA Tournament is as close to perfection as any sports contest can be. It's 65 teams, playing all over the country, non-stop, for a few weekends in March. EVERYONE in the country obediently watches. It's thrilling, compelling. You cannot NOT watch it.

Yet, the NCAA wants to ruin its own perfect baby. Why is it that they want to expand the field of the already massive basketball tournament (65 of the 347 teams in Division-I or 18.7% of all teams make the tournament), yet keep the college football championship field to 2 teams (2 of 120, or 1.7%)?

Adding 3 more play-in games wouldn't be a bad idea. The 16th seed teams are really awful, and this could raise the average quality of the field. But let's keep the changes small and gradual. Baby steps.

Who complains about the NCAA tourney? Who is out there screaming "We need more teams!" "96 or bust!" Why is it that millions bitch about the BCS and nothing happens. Then nobody says a bad thing about the basketball tournament, and the NCAA wants to tinker and toy with it.

And isn't the money enough for the NCAA and all the conferences? CBS pays $545 million to broadcast these games. Every year. Is that not enough this day and age? And who's going to watch these extra games? An expanded field of 96 would dump most of the small conference champions together, eliminating half of them before the REAL tournament started. It would essentially create a boring, pre-tournament, that nobody really watched. Nobody wants to see IUPUI play Weber State. They want to see IUPUI challenge Georgetown. David vs. Goliath was interesting because Goliath was there.

I love the NCAA tournament. 80% of the college basketball that I watch in a season is in March.

BRUINS LEAF A POINT IN TORONTO

Just to put this season in perspective, the Bruins now have 70 points. Last year, they attained this 70 point level on January 15.

What they don't have much of is character. Or fire. Or grit. Whatever you want to call that intangible thing that gives winning teams an additional edge in a fierce battle.

After Savard went down on Sunday, the Bruins didn't retaliate. They tried to win their game. And that was acceptable to me at the time. They're in a playoff race, the points are vital, focus on winning. But the Bruins weren't focused on winning last night in Toronto, they were focused on playing just good enough to not get embarrassed.

Toronto sucks. You saw their goaltending, their defense. And even without Savard and Chara in the lineup, the Bruins are significantly superior to the Leafs. On paper.

Michael "appendix" Ryder is a completely useless waste of space. He serves no purpose. His linemates should get credit for short-handed time on ice, because he really is a great big nothing out there. -3 last night.

And why is it that whenever an opposing player scores a junk goal off a rebound, they always share the crease with Dennis Wideman? He looks like Hal Gill more and more every day. He's just a big screen in front of Thomas out there.

In the next week, the Bruins are at Philly, at Montreal, at New Jersey. That's the 6th, 7th, and 4th place teams in the East. This upcoming stretch is key.