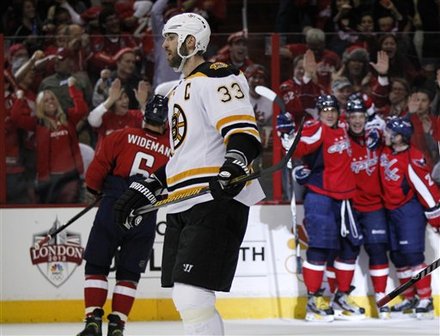 The series is tied 2-2. And as much as Braden Holtby will get praised for this, it really is the Bruins' fault. They're not playing at the same level as Washington. Just look at the Bruins' top scorers (Seguin, Bergeron, Krejci, Lucic, Marchand). These 5 guys have combined for one assist. The top 5 Bruins scorers have one assist in this series.

Then there's the turnovers, which are frequently erased by Thomas, but not always. Then there's Ference falling down. That resulted in a Washington goal.

Defensively, though, the Bruins have been pretty tight in this series. Even when they've made mistakes, somebody has made a play to minimize those errors.

Offensively, this team is lost. Lucic looked like a fucking fool last night. How many times did he give the puck away, or struggle to gain possession?

Then Krejci. How perfect do passes have to be for Krejci to settle the puck?

The 4th line is doing what the 4th line is supposed to do, the 3rd line is scoring, and at least the Bergeron line is generating chances. The Krejci-Lucic line is playing horribly right now. And I think they're the biggest reason this series is tied.

Strategically, the Bruins need to stop throwing shots high on Holtby. He's good with the glove. He's very cocky with the glove, actually. Low shots, generate rebounds, get inside position and try to score. Make him question himself. He's too secure right now.

And the Power Play needs to be simplified in some areas and made more dynamic in others. Two defensemen on the blue-line. No need to have forwards on the point (unless it's Rolston). Move bodies without the puck.

And in all situations, build traffic in front of Holtby.

How much traffic did Thomas deal with last night? How much did Holtby deal with? Thomas had I-93 at 4:45pm on a Friday. Holtby had Route 24 at 2:00am on a Tuesday. Make Holtby struggle to make these saves.

Game 5 is Saturday afternoon in Boston. It's time for the Bruins to show up and play as well as they can play. We haven't seen that all series.