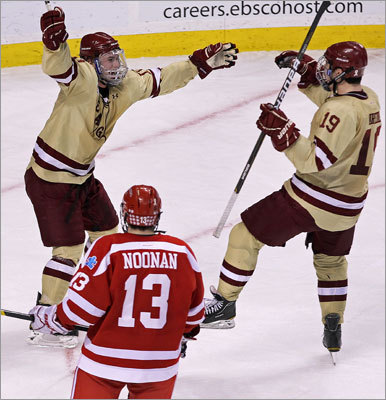 This is the start of "Trophy Season." The Hockey East tournament starts in just under a month. The NCAA tourney follows shortly thereafter. This is the beginning of the important part of the season. It's when games are must-win. And for the 3rd year in a row and the 17th time ever, BC won the Beanpot. With 6.4 seconds left in the first OT period.

It was a classic game. Six of the last 9 Beanpot finals have gone into OT. And these two teams are likely to meet again in the Hockey East tourney, and could very well go deep in the NCAA tournament. Fun fact: the 9 times a team from Boston has won the NCAA Championship, they won the Beanpot just a few weeks earlier.

BC has finally figured out their goaltending situation. Parker Milner has won 6 straight starts, and allowed only 10 goals in that stretch. BC isn't as explosive as they've been in years past, buy last night we saw their sound defensive play. They make good decisions with the puck and have an excellent Penalty Killing unit. And when their Power Play shows up, they're very tough to beat.

BU, for their part, also looked good. Millan is an excellent, experienced goalie. BU can play physical. They just need to stay out of the penalty box.