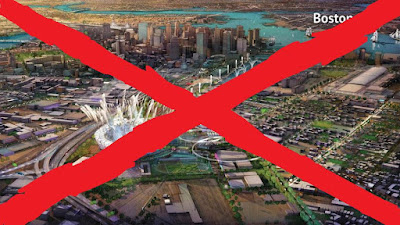 Boston Mayor Martin J. Walsh doesn't want to put taxpayers in the position to pay for cost overruns. That unwillingness to make Boston's citizens the insurance policy for Boston 2024 has resulted in Boston's bid being dropped completely. And thank fucking God for that.

The organizers of Boston 2024 were so sure of their budgeting estimates, that they were willing to put the people of Boston's money on the line to pay in case costs surpassed expectations. That's money that could go to schools, police, fire, public works, snow removal, pothole repair, instead going to pay for a velodrome. Which is a steeply banked bicycle race track. Which nobody has any use for, which is why we don't already have one.

The benefits of hosting the Olympics would have been shared among a select group of rich individuals and companies. It would be a bonanza for Suffolk Construction. Bob Kraft would get a cheap soccer specific stadium for the Revs. Everyone publicly pushing for the games to be here would have seen their wallets fatten, whether through business deals or just the paychecks they get working for the Boston 2024 organization. And if costs exceeded expectation, the people would have paid. While the beneficiaries still got paid the same.

After watching the Olympic debate on Fox 25 last week, my anti-Boston 2024 sentiment went from a small controlled fire to a raging inferno. Steve Pagliuca could not give straight answers to simple questions. Daniel Doctoroff was a smarmy jerk. Every question raised by the media or by people against Boston 2024 was dismissed as "hyperbole," or "inflammatory," or not answered at all.

And the T wouldn't benefit directly from the Olympics. There are no Boston 2024 funds allocated to improving it. The T needs to be fixed on its own, BEFORE 2024. The commuter rail and subway lack modern, functioning equipment. Routes and systems need to be updated. The amount of economic production lost due to public transportation issues is unacceptable for a major city. And we should focus on remedying these problems before taking on the challenge of catering to the Olympics.

The Boston 2024 plan was built by optimistic businessmen who stood to gain from Boston hosting. And if their optimistic cost and revenue estimates didn't come to fruition in reality, the people were going to pay. And that's wrong. You can't have one group of people enjoy the profit while another group takes the risk.