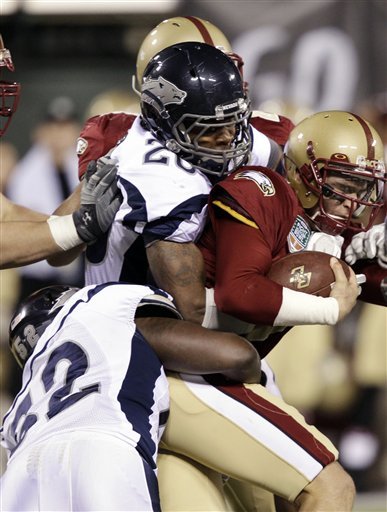 But my favorite stat was this one: BC forced Nevada to punt 7 times. They averaged 2.3 punts per game this year. The Eagles also forced 3 turnovers, to go with those drives ending in punts.

One of those turnovers was an interception by sophomore All-American linebacker Luke Kuechly. This is one of the best players in the game. He's fast, he has a nose for the ball, and he's strong. Keep an eye on him next year.

That's the mantra for BC football. This was a "rebuilding year," to put it kindly. The offense needs to improve. Freshman RB Andre Williams has a bright year ahead of him. But freshman QB Chase Rettig looked like he was about to cry at the end of this game.

I understand the idea of starting Rettig, to get him experience and make him a solid QB as an upperclassman. However, the style of offense BC uses is too bland, too straight-up, too NFL-esque. Why not run more misdirection running plays? Why not try the option? Why are the Eagles using the same kind of offense that Matt Ryan ran? It won't work with mediocre QBs. Even if Rettig improves to serviceable, this offense isn't dynamic enough.

I'll put it like this: BC will never be stronger or faster than their top tier opponents. So trying to beat them eye-to-eye, nose-to-nose is suicidal. Be smart. Be clever. Be elusive. At the very least, be more exciting.

Anyway, a forgettable season with a semi-memorable ending. At least more memorable than losing to Vanderbilt or winning the Meineke Car Care Bowl.

PATS VS. JETS IN RUBBER GAME

You get the feeling that it had to be this way. Even Rex Ryan seemed to be anticipating this Divisional Round matchup when last week he unfavorably compared Tom Brady's work ethic to Peyton Manning. Or maybe he was just putting his foot in his mouth. Or someone else's.

These teams not only split the season series, they've split their last 6 games. It makes sense when you consider how well their different strengths matchup. The Patriots pass first, ask questions later. The Jets run. The Pats have a young, sometimes shaky defense. The Jets have more experience, and are far sturdier. The Patriots keep their mouths shut. The Jets are a reality TV show.

I think the Patriots' ability to distribute the ball to multiple offensive weapons will allow them to regularly beat the Jets' defense. The Jets do have some exceptionally talented guys on defense, but Brady is the master at finding the weak spot, and hitting the open receiver.

However, I temper my optimism knowing that for many of the Pats' weapons, this will be their first postseason game. This past weekend, we saw playoff newcomers drop passes, fumble the ball, and generally fail to execute as they had in the regular season.

Aaron Hernandez, Rob Gronkowski, and BenJarvus Green-Ellis have never played postseason football. Danny Woodhead has 1 career touch in the playoffs. Even Wes Welker has only 3 playoff games under his belt. The defensive side of the ball is hardly any better. McCourty, Chung, Spikes, Cunningham, and so on, are all newbies to this scene. And while veterans like Brady, Branch, and Wilfork might settle locker room nerves, it only takes one or two players making one or two mistakes to screw up an entire game (See: Pierre Woods, Super Bowl XLII).

The Jets actually bring more playoff experience, or at least have theirs distributed more evenly throughout their roster. Sanchez already has 4 games under his belt. Guys like LT, Braylon Edwards, Shonn Greene, Santonio Holmes, and so on, have all been in big games. And won them. That's something to keep in mind.

The health of Danny Woodhead is also something to keep in mind, as he made nothing but big plays in the 45-3 win a few weeks ago. We know that it was a concussion he suffered. We know that he's been practicing with a non-contact jersey.

The key to this game will be how the Patriots do against the Jets' rushing attack in the early stages. In that 45-3 win, the Jets ran for 152 yards, but most of those came when the game was essentially over. The Jets can run (148.4 yards per game, 4th in the NFL), and run well. The Pats have a depleted defensive line. It will be up to guys like Wilfork and Mayo to contain the running attack, and to limit rushes to 3 or 4 yards at the most.

It will also be up to Brady and the offense to hold onto the ball, and to score. The best way to stop an opponent from rushing is to build a lead.

I think the Patriots will be hurt by the Jets' RBs, but not killed. The Pats' offense will score enough to force Mark Sanchez to try to make plays, and we all know what happens next. 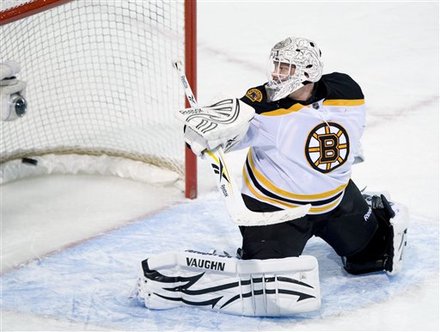 You can't get much closer to winning than the Bruins were Saturday night. They outplayed the Habs for a good 50 minutes, getting to loose pucks, winning battles on the boards, playing great in all three zones. Montreal's two regulation goals came off skates, not sticks. One off Chara's, one off Gionta's. Both seemed to slither over Thomas's leg pads as if they had a will of their own. Freakish, to say the least.

Speaking of Chara, he was half a foot (one sixth of a meter in Quebec) from ending the game with an empty-net goal. But that play actually epitomizes the Bruins' collapse, as he wasn't trying to shoot the puck at all. 200 feet from the net, he tried to loft the puck into the neutral zone, hoping it would settle there and the Bruins could change skaters. He got too much power behind it, and it went all the way down the ice, nearly scoring, but missing and becoming an icing call. Montreal scored off the ensuing faceoff. So Chara's near-miss was actually a full mistake.

And so was the tripping penalty on Ryder. Wisniewski's dive had all the subtlety of Sean Penn in I Am Sam, but it was still a mistake for Ryder to be flailing his stick at Wisniewski's ankles, especially since he was 120 feet from the goal. Then there was Wheeler's hooking penalty in overtime, about 190 feet from the goal. It's just stupid to be committing basic stick infractions that far from danger.

The Bruins' Power Play was dreadful. I don't expect them to score more than 18% of the time, but they need to do better at getting shots on net. Make the opposing PK unit work, make the goalie work.

I stated above that the Bruins outplayed Montreal for most of this game, and that's true. But mostly because Montreal played like crap for the first 40 minutes. They whiffed on shots, turned the puck over in bad areas, and committed dumb penalties. If not for Price, they would have been in a much deeper hole.

In other words, the Bruins got to those loose pucks and won those battles because Montreal brought their C-Game to the 1st and 2nd periods. That's not much to be proud of.

The Bruins haven't beaten Montreal since last February. Technically, they're still in 1st due to tie-breakers, despite an embarrassing 5-4-3 record within the Division. They're in Pittsburgh tonight, and I'm not too confident, with or without Crosby dressing for the Penguins.