Bruins Get Revenge on Tim Thomas the Traitor The Bruins finally got the opportunity to exact revenge on Tim Thomas, the goalie who abandoned them last season, and forced them to carry his large cap hit on their books for almost three whole weeks before his contract was traded to the Islanders. That extended period of Thomas' contract being on the books most likely was the difference between the Bruins winning the Cup this summer and not winning it.

Oh, and don't forget that Thomas was the reason the B's didn't go deep into the 2012 playoffs either. Because his politics became a distraction.

Thankfully, the Bruins got their chance to avenge themselves on this saboteur, this rambunctious loudmouth whose political beliefs completely and totally hijacked the 2012 Bruins season and turned it into a farce. Nobody, especially not the media who begrudgingly discussed Thomas' political views, knows why Thomas' psychotic agenda didn't derail the 2011 season. Perhaps because it wasn't an election year. And perhaps Thomas' influence was countered by leaders who weren't around in 2012 to do the same thing. Evidently, Mark Recchi wasn't just a force on the ice, he also kept Thomas' insane views from distracting the team.

Thomas was the only athlete in the history of sports to refuse to visit the White House after winning a championship. I don't need to double-check that fact because the reaction to his not meeting and greeting Barack Obama speaks for itself. Why would the media and fans react with such uproar if such a thing has happened before or since?

Tim Thomas' tenure in Boston was marked with his desire for nothing but personal glory. His two Vezinas and his Conn Smythe trophy are exhibits A, B, and C of his scheming to draw all the attention on to himself.

His departure was one of the messiest exits in the history of sports in this town. He was, brace yourself, disloyal to a team that was shopping him around the League. He took off the final, lowest paid year of his contract in a season that nobody was sure would even be played. His actions seriously hamstrung his team. Even though Cam Neely was actively trying to get rid of him, he still should have been loyal to the team that gave him so much. After all, the Bruins were the team that put Thomas on their NHL depth chart behind Manny Fernandez, Tuukka Rask, Steve Shields, John Grahame, Andrew Raycroft, Hannu Toivenen. The B's are the team that gave Thomas a chance, once everyone else had a chance and sucked.

Thomas threw the loyalty and faith of that relationship in the proverbial toilet when he didn't stay in Boston to be traded somewhere else. That selfish bastard decided to take the abbreviated season off, instead of allowing his benevolent team to send him anywhere in the NHL. How could you be so disloyal to a team that had consistently tried to get rid of you and give you a new home, from before the 2010-11 season, to after the 2011-12 season? It's just so appalling that he wasn't loyal to the Bruins, and to the fanbase that only criticized him for half a season because of his political beliefs.

Thankfully, the Bruins got their revenge on the traitor Thursday night with a 3-2 victory. 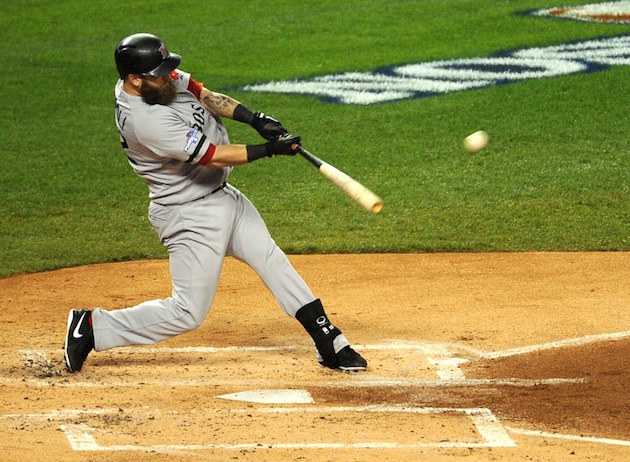 The Red Sox have adjusted to Anibal Sanchez since Game 1. They got their first hit of the series off him in the 1st inning. Then scored the first run off him in the 2nd. The Sox came out swinging in this game. They were not on the backfoot, not on the defensive. As we've seen all season with this team, losing only makes them more aggressive and ferocious in their next game. They don't fall back and regroup. They instantly counterattack. Like a cornered animal.

Jon Lester was not Ace-like in this game. He didn't have to be. He played with fire throughout his 5.1 innings, giving up 7 hits and walking 3. Though he never got burnt. Only 2 runs scored on his watch but his inability to go deep into the game made the Sox vulnerable. Lester did his job, but he also made the jobs of others harder.

I like Junichi Tazawa, but I don't trust him. Not in a 1-run game. I have partial trust in Craig Breslow, barely enough for a 1-run game. I trust Koji Uehara implicitly, any game, any situation. Red Sox starters need to pitch into the 7th inning in order to avoid exposing the soft underbelly of the bullpen. Breslow and Uehara are the only bullpen arms Sox fans should want to see in the late innings.

The series returns to Boston Saturday evening at 4:30pm. Clay Buchholz faces Max Scherzer. I honestly have no idea what to expect in that game. And that's what has made this series such a thrill to watch.

Photo Credit:
USA Today
Posted by rob at 10:00 AM No comments: