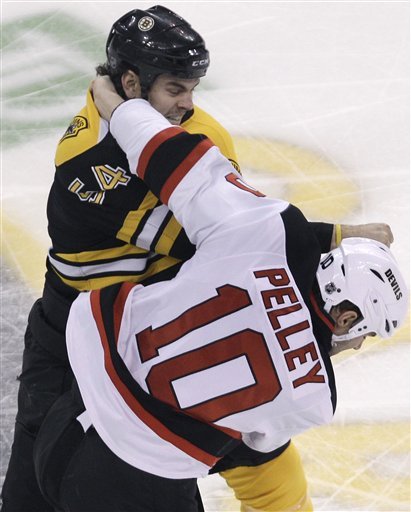 Yesterday, I was very direct in my criticism of Blake Wheeler and Mark Stuart. But today, I have to praise them for what they did last night. They each put up $5,000 to buy tickets for members of our Armed Forces, and encouraged fans to donate money as well. Over $70,000 in tickets were given away to men and women in uniform. As someone with a brother in Afghanistan, and one of my best friend's stationed at Fort Hood, and just as an American, I thought that was pretty cool of Wheeler and Stuart.

And it was especially nice to see them both have a good game. Wheeler firing a sniper shot and Stuart deploying some heavy artillery.

The Bruins hadn't led in a game for over 135 minutes until Michael Ryder squeezed one between Brodeur and the post. Horton also returned to the scoresheet with his 8th. But the real star of the show was Thomas.

A 28 Save Shutout might not seem stunning on paper. But Thomas survived an early onslaught, attacking the puck-carrier in vintage Tim Thomas style, yet remaining square to the shooter at all times. Then in the 3rd, he stayed strong as the Bruins do what they do best: play careless hockey with a 3 goal lead.

Maybe with a healthy Tim Thomas, the Bruins could have preserved their 3-0 lead in Game 7 against Philly. Maybe. 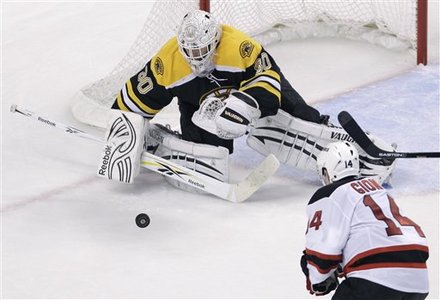 But speaking of last night's 3rd period, it did leave a sour taste in my mouth. With Thomas and Rask, it's hard to imagine blowing a significant number of 3 goal leads in the regular season. But the lack of focus and care in last night's 3rd is indicative of a much more alarming problem.

This team has mood swings. They play with casual overconfidence when they're leading. Instead of smelling blood in the water, or holding their foot down, they ease up. They lose focus, make careless passes in the neutral zone. And against top-tier teams, that will inevitably lead to disaster.

But the Devils are not a top-tier team. They have the 3rd worst record in the NHL, along with the most losses. So I'm not too overly impressed with the Bruins' 3-0 win. But after the last week and a half, I'll take it.

And these guys were funnier when they imitated New Jersey coach John MacLean, not when they mocked him.

And since his name was John MacLean, dressing up as Hans Gruber would have been much funnier.