FRED TAYLOR TO HAVE SURGERY

The Patriots RB Corps took a big hit today, as it was reported by various sources that Fred Taylor will undergo surgery on his injured right ankle. It's still unclear as to how long this would keep Taylor on the sidelines.

From the Silver Lining Department, any time off could help keep Taylor relatively fresh for the stretch run and potential playoffs. Nevertheless, Taylor's the only RB on this team who has shown the kind of stuff to be a featured back.

Only in the English language could words spelled like that rhyme.

Laurence Maroney, who's struggled in Foxborough ever since the departure of Corey Dillon, made an enemy out of me this week. I've never been a huge fan, based mostly on his on-field performances. But I never held a personal grudge against him either. Until now.

Fresh off a disappointing 6 yard, 7 carry performance against the Ravens, Maroney addressed his being booed by the Gillette Stadium crowd. He then analyzed his performance:

He's not throwing the O-Line under the bus in full-blown Peyton Manning style, but he shouldn't be talking about them at all. You never heard Rodney Harrison say things like "We'd stop the run better if the linemen filled the gaps better." Or Brady say "We would've beaten the Giants had the line held up their pass rush."

Maroney is still a college back. In college rushing, defensive players overcommit like crazy. By the time Maroney hit the line of scrimmage, most of the defense was out of position. And only a few of them had the physical attributes to atone for this. So a fast guy like Maroney gets 10, 15 yards with ease. Here are some of Maroney's highlights, with Marion Barber mixed in as well. Maroney is #22, Barber is #21.

Maroney's not soft. He's fast. He just isn't fast enough and decisive enough to consistently succeed as an NFL back.

That being said, he does have a role on this team. I would like to see him as the 4th quarter RB (when the Pats have the lead, of course). When the opposing defense is tired from rushing the passer 40 times, and tackling Fred Taylor 15 times, that's when Maroney can excel. We saw that in 2006 when Corey Dillon would wear out the defense, then Laurence would run circles around them.

Source:
Boston.com
Posted by rob at 2:10 PM No comments:

The notable aspect of this is that Paul Byrd is on the roster, Manny Delcarmen is not. Byrd can provide long-relief, just in case the injured Beckett, semi-injured Lester, semi-rookie Buchholz, or 5 inning wonder Matsuzaka need it. Rocco Baldelli also failed to make the ALDS roster.

But that's small comfort to me.

Here are the pitching matchups for this series:

Game 1 looks like an offensive shootout in disguise. The Sox hit Lackey well. The Angels hit Lester really well. Victor Martinez is 10/21 against Lackey. Vlad Guerrero is 4/10 against Lester. This game will surpass 10 total runs and will be determined by the bullpens. The Angels' pen isn't as deep as the Sox, so Game 1 will go to the good guys. Game 2 worries me. Josh Beckett worries me. He had 20 Quality Starts, but a 3.86 ERA. He's been up and down all season. I really hope I'm wrong, and that 2007's Josh Beckett comes out to shine in the 2009 postseason, but I think we'll see what we saw in the '08 LCS against Tampa. The Sox hit Weaver well, so it'll be close, but I have to give the Angels the edge in Game 2.

Splitting two games in Anaheim would be a fantastic result for the Sox, who have the 2nd best home record in all of baseball. But the Angels have a secret weapon in Scott Kazmir. V-Mart, Ellsbury, and Pedroia will be able to hit Kazmir. The rest of the lineup will be lulled to sleep. I'm looking forward to seeing Buchholz in the playoffs. I think he'll do fine. But Kazmir will be lights out. Angels in Game 3.

This means Game 4 will be crazy. Matsuzaka is the likeliest candidate to start, but if the Sox are down 2-1, Lester might get the nod on short rest. Either way, I have little faith. Matsuzaka is a ticking timebomb waiting to implode. Lester's a lot like Pedro Martinez in that he needs his 4 days rest, and is a great pitcher for 100 pitches. But mess with that, and you're playing with fire. Angels win Game 4.

I really really hope I'm wrong. But I can't shake the feeling that the Angels will win this series in 4. Maybe it's just my late 90s pessimism reemerging. I certainly hope so. 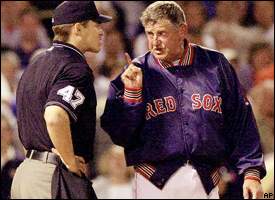