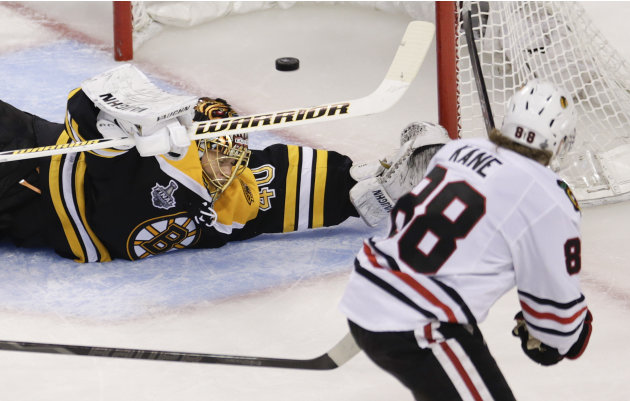 I want to preface my thoughts by saying that I've seen the Bruins win a Cup, I've seen the Red Sox win a World Series after an eight decade drought, I've seen the Patriots win their first three Super Bowls, I even got to see the Celtics win Banner #17. I'm not as pissed or as stricken with sadness as others are. After witnessing all those Championships, everything since then has felt like an opportunity for a bonus.

Also, as nice as it would have been for the B's to win a title after what happened at the Marathon, I think it was enough to have a deep playoff run and let the City enjoy that. The last few weeks have provided a sense of back-to-normal for this town, and that's more than we could ask for.

Now to the series. The Blackhawks deserved to win. They arguably brought the most talent to the series with Kane, Sharp, and Toews. At the very least, they brought an equal amount of talent. And they played the best. More importantly, they played the best when it mattered most. They outscored the Bruins 6-5 in the 3rd periods this series, and 2-1 in OT. They had two dramatic comeback wins in Games 1 and 6.

The B's had some great periods in this series, very few great games. They relied on Tuukka Rask and Zdeno Chara to carry them. And in Games 5 and 6, Rask and Chara were not able to carry the team all the way.

Again, Rask was not the reason the Bruins lost. He was the best goalie in this series. The Blackhawks were good enough to cover for their goalie's weaknesses and shortcomings. The Bruins had fewer shortcomings to cover for, yet failed to do so.

The stars shone for Chicago. Jonathan Toews scored 2 goals and added 3 assists in this series. Sharp scored 2 goals. Kane scored 3 goals with 2 assists. Bickell scored a goal with 3 assists and hitched himself to Chara like a 233 pound anchor. The Blackhawks had multiple Conn Smythe candidates, while if the Bruins had won this series it would have almost certainly been Rask to win the Conn Smythe.

Meanwhile, the Bruins leaned on Rask and Chara. Chara seemed to be worn out or hurt in these last games. That's part of the game.

Not enough Bruins stepped up as Chara and Rask played like human beings. Seguin didn't score in the Finals. Neither did Krejci (and he was painfully close to scoring in Game 6, that's an opportunity he has to finish). Neither did Horton. Neither did Marchand. Nor did the Bruins get a handful of goals from a defenseman.

Lucic and Bergeron scored 4 goals apiece in the Finals, Kelly and Paille each scored 2. Peverley, Boychuk, and Chara each scored 1 goal. Where was everyone else? If just one more forward had a big series, or if three forwards contributed with goals, this series would have been completely different.

Only two of the top-6 Bruins forwards scored in the Finals. The 3rd line scored as many goals as the 1st and 2nd lines. Not enough talented forwards showed up for the Bruins in this series. They had assists, they contributed, they just didn't score.

Ultimately, I'd rather lose to the Blackhawks than a team like the Canucks. I'd rather see Chicago win the Cup than a hockey-apathetic town like Tampa or Raleigh. I don't mind Chicago winning nearly as much as I mind the Bruins losing, or at least losing the way they lost. A Krug turnover, a soft goal allowed by Rask, a missed opportunity by Krejci. This series was so close to turning in the opposite direction. The Hawks made the plays, the B's made the mistakes.

I don't feel like we need to mourn this season. It could have produced more, but it didn't. It could have produced much less and ended in the first round with an epic collapse against Toronto. There does need to be some evaluation. The cap will be tighter in 2013-14. Seguin needs to realize his potential instead of being a 3rd liner. And the supporting cast needs to be changed. I won't miss Rich Peverley.

Thankfully there's no CBA BS to prolong our wait for more hockey.

I turn on the radio this morning to listen to some sports talk while taking a shower, brushing my teeth, and all that. I turn on Toucher & Rich on 98.5 because I don't want to get Whitey thoughts on WEEI, or hear about today's Senate election, or listen to two dunderheads in love with their own opinions fail at understanding the game of hockey.

Unfortunately, T&R babble on and on just as badly as D&C. After enduring 3 minutes of commercials featuring people with fake Boston accents in an effort to endeer (endee-yah) themselves to the people of Massachusetts, I get to listen to Toucher and Rich go on a tangent about this weird, very inside joke about Adolfo's father encouraging him to have kids. This goes on and on. Not mentioned in passing. And then a caller joins in talking about how overwhelmed he is by 4 children. This would be great stuff if the show were called The Fatherhood Hour on NPR, but it's allegedly a sports radio show on a station that stylizes itself as sports radio.

I don't want to be required to listen to a show day in and day out to understand the jokes. And I don't want to listen to stupid jokes about wacky Adolfo and his zany father on a frigging sports radio station, the morning after a Stanley Cup Final was lost, days after a championship winning basketball coach left town, and a week after a Pro-Bowl tight-end was implicated as being involved in a murder. I know it's crazy of me to anticipate sports talk on a sports talk station, especially with such a lack of stories to discuss. Call me persnickety.

We have two sports talk stations in Boston. Yet finding sports talk in the morning on either of them is a hit or miss proposition. And I'm tired of it.