The Red Sox scored the 2nd most runs in baseball last year. They were 2nd in homeruns, 3rd in OBP, 2nd in slugging, 1st in OPS. In other words, they were pretty good at the plate. And they should be even better in 2011.

Adding Carl Crawford and Adrian Gonzalez were the big stories of the off-season. Not to mention the returns of Kevin Youkilis and Dustin Pedroia, who only played in 102 and 75 games last year, respectively. These newcomers and returning producers should more than offset the loss of Beltre and Victor Martinez.

The middle of the lineup will be fierce. Gonzalez, liberated from San Diego's pitcher friendly park, should hit over .300, with an OBP close to .400, slug near .600, and approach 40 homers. Youkilis should hit nearly 30 homers, with an OBP well over .400, and slug around .570.

Putting Crawford and Pedroia ahead of them will result in abundant runs. Gonzalez could knock in 120, and Youkilis should easily surpass 100 RBI.

JD Drew's contract is up, so I think he'll actually play more than 140 games and produce. Then there's Ortiz, whose 32 homers and 102 RBIs were impressive in 2010. But he really struggled against lefties. Drew also can't hit southpaws. So against righties, the Sox will have an excellent 5-6 to keep the pressure on. Against lefties, you'll see plenty of innings ended by Drew and Ortiz.

The bottom of the lineup will be solid enough. I like Ellsbury as a 7th or 9th hitter, either keeping the middle of the orders' rallies going, or helping Crawford and Pedroia start a new one. He should hit .300, with a .350 OBP that keeps him from being a good leadoff option. Minimal power, but plenty of speed.

Scutaro had a decent year last season. But we've all sort of forgotten. So did Lowrie. Having both of them as options is a nice luxury. Both play good defense, and neither are easy outs. That's all you really want or need from the 8th spot in your lineup.

Speaking of easy outs, we come to Varitek/Saltalamacchia. They'll ground into so many double plays. That is, if they even make contact with the ball.

Anyway you stack it, this lineup is pretty sick. Mike Cameron can fill in for Drew against lefties. And the speed of Crawford and Ellsbury can help keep the whole batting order from slumping. And even if a tough lefty is on the mound, guys like Youkilis (.404 against LHP last year), can still give them problems.

You have an amazing offense, and suspect pitching. I'm reminded of the Cleveland Indians from 1995 to 1999. They'll be fun to watch. They'll win 100 regular season games. And they'll lose the World Series to a team with superior pitching. I'm thinking the Phillies. 1946 all over again.
Posted by rob at 11:00 AM No comments:

100 wins. All I keep hearing about is 100 wins. It's something the Red Sox haven't done since 1946. But is that really the achievement to long for? The Sox lost the 1946 World Series. And there are some parallels to that 1946 team, which led the Majors in offense, scoring half a run per game more than anyone else, but were 9th of 16 teams in runs allowed. They lost the World Series to St. Louis, the team that allowed the fewest runs in baseball.

Then, as now, pitching wins. And that's where I'll start this preview. Because even though a great offense can win 100 regular season games, it's pitching that wins 11 postseason games.

The Sox rotation looks the same as last year. And it has just as many question marks. We can pretty much bank on Jon Lester to have an ERA below 3.50, and 16 to 20 wins. He's been the rock of the rotation, and one of the most consistent pitchers in baseball the last 3 seasons.

Then there's Buchholz. Call me negative, but him repeating his 2010 feats is not guaranteed. We've all sort of assumed he will once again register an ERA around 2.50 and win close to 20 games. Maybe he will. Even 17 wins and a 3.00 ERA would be excellent. But he's 26. He has one great season under his belt. He's still a question mark. Even though he's overshadowed by much larger question marks in the rotation. 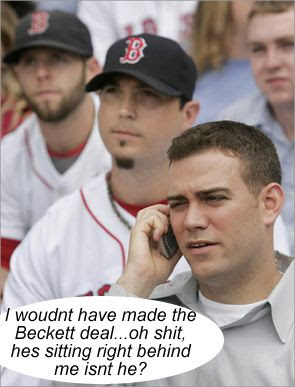 Among qualifying pitchers, John Lackey had the 73rd lowest ERA in baseball last year. He did eat innings, but that's pretty much it. You can live with him as a #4 starter, but if Beckett doesn't have a good year, he's your #3. And if Buchholz falters, he's your #2. And that's an alarming thought.

Then there's Daisuke. If any other pitcher won 18 games their sophomore season, then was repeatedly injured, struggled when healthy, and averaged 96 walks per full season, we'd be talking about sending him to Pawtucket. So what makes Daisuke so special? I just don't have a good feeling about Daisuke in 2011. Even when healthy, even when at his best, he doesn't go deep into games. His 18 win season was coupled with 167.2 innings pitched. 90 pitchers managed to surpass that mark in 2010.

Thankfully, the bullpen looks quite a bit better than last year. The Sox blew the 4th most saves in baseball last year. And with shaky starting pitching, the bullpen will be worked hard in 2011.

Papelbon is still the closer. And even though he's not as elite as he used to be, he's still good enough. It'd be tough to find an improvement over him, but it won't be hard to find a replacement.

Daniel Bard has impressed as a set-up man, with a 1.11 WHIP in 124 career relief innings. Bard and Papelbon represent a quality 8th and 9th inning tandem. But they can't be overworked. They need help.

Bobby Jenks is a possible option. That's what the Sox did to this bullpen: added options. They signed a number of guys, hoping that one or two would work out as reliable set-up men. In the dice game that is relief pitching, this is a viable strategy to build a quality bullpen.

But Jenks is coming off a bad year. And he's gotten progressively worse since 2007. You never know with relievers, but it's hard to imagine that trend changing.

I'm much more optimistic about Dan Wheeler, who's pitched with success in the AL East. He's 33, but has 530 appearances under his belt. He'll wind up as the secondary set-up guy alongside Bard.

Wakefield will be a mop up man and spot starter. Doubront will be used against lefties.

The rest of the bullpen will be a revolving door of arms. Maybe one will be reliable enough to be a 6th inning man, or the type of guy that's brought in when the Sox are down 2 runs in the 7th.

Overrall, the bullpen isn't great, but it's no longer a liability. The rotation, however, is very suspect. So much needs to happen for it to work. And so much can go wrong for it to fail. I don't see Beckett winning more than 15 games. I don't see Daisuke throwing more than 180 innings. I see Buchholz having a good-not-great year. I don't see Lackey doing much better than he did in 2010.

But the offense should be able to make up for these shortcomings. At least in the regular season.
Posted by rob at 10:00 AM No comments: