HOW THE WEST WAS WON 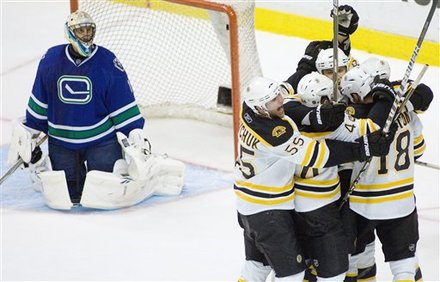 Maybe the Bruins should request to play their playoff games on the road. They certainly seem to perform best while away from Boston. The Bruins have won all 5 on their road trip, including a 3-1 win over the Canucks, holders of the best home record in the NHL.

How? Well, it starts with goaltending. Tim Thomas excelled in Vancouver and Calgary, and Tuukka Rask more than held his own in Edmonton, Ottawa, and Nassau.

Then comes the timely scoring. Horton's muscular goal to tie the game in Vancouver. Then Lucic's winning score in the 3rd of the Vancouver game. Lucic has learned the art of scoring in the slot. When he scored against the Canucks, it wasn't just good old fashioned aggression. When Seidenberg blasted a shot, Lucic was ready to smack in the rebound.

What's amazed me about Lucic this season is how quickly he becomes ready to score, how he positions himself in scoring position, before the rebound reaches his stick. When Seidenberg was rearing back to take his shot, Lucic was already prepping for the rebound. And that's why he has 27 goals.

In Edmonton, the team's effort wasn't as inspirational. Then again, they'd just taken on a tough opponent, then traveled to another West Canada bastion of hockey. Nevertheless, the Bruins still overcame the lowly Oilers. It was nice to see guys like Horton and Ryder finally paying their dues on the party bus.

This is a team that will take some doing to reckon with.

Bruins at Senators on Tuesday night.