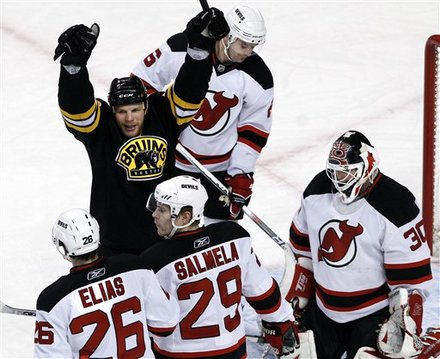 There were a lot of things to like about how the Bruins played this game. The Power Play looked good all night and finally broke through with a goal. The B's adjusted to New Jersey's forechecking. Marchand and Kaberle skated their brains out. Seguin and Peverley are clicking. Thomas had an excellent rebound game. Lucic returned to scoring form.

The three players who have carried this team (Thomas, Chara, and Lucic) all had bad games in Toronto. They all had great games last night. Thomas with 30 saves, including 15 tough ones in the 1st period. Chara with a goal and two assists. Lucic with a goal and an assist. These three guys are the foundation of this team. Without them, this team is doomed.

Now let's not go nuts. We've seen this team answer wake-up calls before. Too many times. The real questions are: why were they asleep at all? And why will they fall asleep again? I've said it before; over the course of a season, this team requires more wake-up calls than a hotel hosting a narcolepsy convention.

And this game wasn't all roses either. The Penalty Kill allowed yet another goal. And it was thanks to Gregory Campbell, who saw Kovalchuk drifting behind him, and did nothing to get in the shooting lane. Instead, he tried to cover a forward that Boychuk had contained. On the Penalty Kill, you have to make compromises, and you will allow shots. But one of those compromises doesn't have to be letting Ilya freaking Kovalchuk have half the ice to shoot from.

If I have to watch Michael Ryder screw up anymore, I'm going to have an aneurysm.

He and Krejci had golden scoring opportunities, ruined by poor judgment. Both failed to position themselves in a shooting stance as they drove toward the net. Each received passes that were just inches off the mark. But instead of shooting a backhander anyway, they tried to get the puck to their forehand. When in the slot in front of the net there are two things you don't have much of: time and space.

Maybe I'm nitpicking. While I'm satisfied with how well the Bruins played last night, their problem has been maintaining such energy and fortitude.

Big game on Thursday as Montreal comes to town. The Habs haven't been too sharp since the Chara incident. This is a chance for the B's to put some distance between them.
Posted by rob at 10:00 AM No comments: