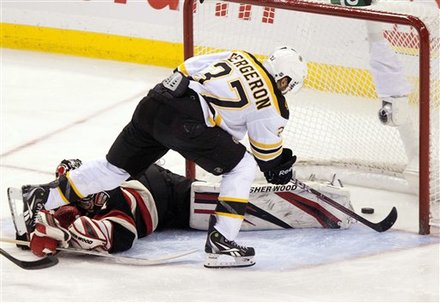 This was a sleepy game. Both teams played the night before, both had to travel. Neither team played very well, nor with intensity. Both teams made mental errors. The decisive difference was that Tim Thomas is a much better goalie than Craig Anderson.

Timmy looked much more comfortable and poised than his last start in Columbus. He made some big saves, he moved across the crease with speed and grace. He faced 49 shots and stopped all but 2 of them. And the second one probably should have been blocked by Joe Corvo.

The Bruins scored some breakaway goals, taking advantage of Ottawa's mistakes. But they made plenty of their own. Thankfully the Bruins have Tim Thomas, and the Senators only have one Daniel Alfredsson and one Jason Spezza. If time of possession were kept as a stat, the Senators would have dominated the category. I don't mind short possessions that end in breakaway goals, but the B's didn't take care of the puck in their own zone or in the neutral zone, and often didn't even get the puck into the offensive zone.

But, we are in the middle of December, 30 games into a long regular season. It was a back-to-back game against an opponent that can be beaten with less than 100% effort. And ultimately, it was a win. The Bruins' 20th win. Which ties them with Minnesota for the most in the NHL. The B's are 9-2-0 in the Northeast Division. They're one of 3 teams with 100+ goals scored. And they've only allowed 61.

They face one of the other 100+ goal teams on Saturday, in a matinee against the Flyers.