BC Wins Yet Another National Title 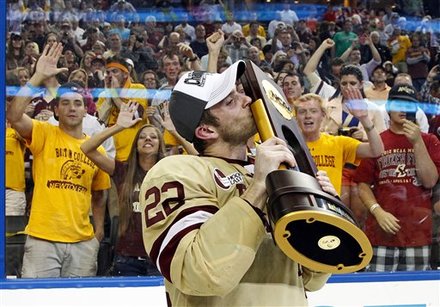 Is Jerry York the best collegiate coach currently coaching a team? If he's not, he's right up there.

BC beat Ferris State 4-1 Saturday night to win their 5th NCAA title, their 4th under York, and their 3rd in 5 years. York now has 5 championships as a head coach. He won his first with Bowling Green in 1984.

The BC Eagles ended the season with 19 straight wins. They haven't lost since January 21st. That streak includes a Beanpot win, a Hockey East tournament win, and some impressive victories in the NCAA tournament. They beat last year's champs, Minnesota-Duluth, as well as WCHA regular season champs Minnesota.

Parker Milner was the biggest key to the Eagles' success. At the start of the season, he was one of 3 goalies vying to replace John Muse. He eventually settled into the role, then dominated. In the NCAA tournament he stopped 110 of 112 shots (.982 SV%). He's the Tim Thomas of college hockey. He was deservedly named the Most Outstanding Player of the tournament.

The Eagles have 9 players with NHL affiliation, and they're losing 6 seniors. But their ability to continually reload has been why theirs is the best program in the sport. Milner is only a junior, this guy Johnny Gaudreau is only a freshman. 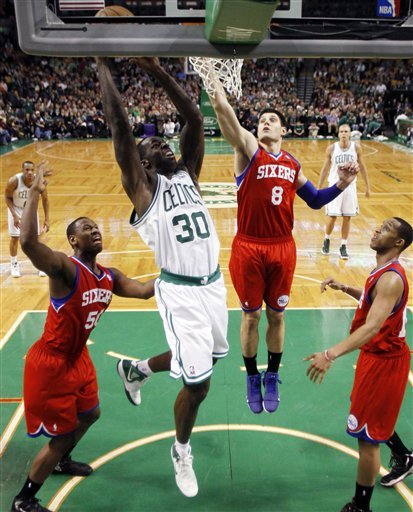 The Celtics rolled over the 76ers last night, and by doing so extended their lead in the Atlantic Division to 3 games over Philadelphia and New York. With only 10 games remaining, the Celtics are growing closer and closer to clinching a top 4 seed in the playoffs, as well as home-court advantage in the first round.

Avery Bradley continues to impress. He dropped 18 points last night. It was a total team effort for the C's. Garnett scored 20, Brandon Bass had 18, and Pierce had 17. Rondo had 15 assists. Ray Allen had 10 points off the bench. That's a weird sentence to write.

I'm still not overly confident about a deep playoff run, but home-court should be a huge advantage. The Celtics are 20-9 at home this year, and 12-15 on the road.

And I don't think anyone wants to draw them in the playoffs, in any round. Garnett, Rondo, Pierce, now Bradley and Bass, and Allen off the bench. That's scary. 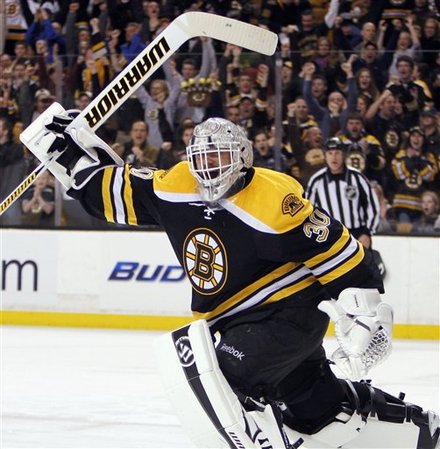 The Bruins were literally playing for nothing but pride on Thursday in Ottawa and on Saturday against Buffalo. And they should be proud of how well they did.

Anton Khudobin stood on his head, making 44 saves on 45 shots against Ottawa. The Bruins were without Thomas, without Chara, and without Bergeron, but they still managed to beat a team that was already in playoff mode. The Bruins gave key players a rest and still managed to win. Which made one B's fan in Section 325 very happy.

Saturday was a tune-up game. You don't want to sit players for too long, especially goalies. The lineup looked more normal. The Bruins surged from 3-1 down to tie it, Thomas didn't allow a goal in the shootout, and the Bruins ended the regular season with a win.

Now it's playoff time. Against Washington, not Ottawa.

That series begins Thursday night in Boston and we'll have a full preview of it later in the week. 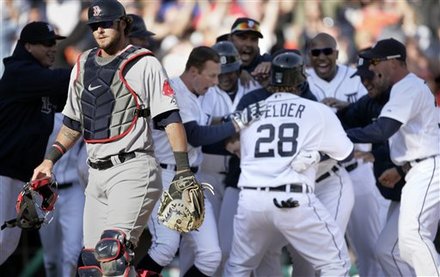 Vicente Padilla had the second best pitching performance for the Sox in Detroit. Need I say more?

No. But I will anyway.

A pair of horrible starts from Beckett and Buchholz, combined with inconsistent hitting, and one unbelievably shitty bullpen resulted in a Detroit Tigers sweep. Just like in September, the Sox are finding different ways to lose.

Alfredo Aceves gave up the winning hit in Thursday's loss. Yesterday he blew a 3 run lead. Mark Melancon also blew a save yesterday, and now he's 0-2. It's April 9th and the Sox have a reliever that's 0-2. That's sadly impressive.

One bright spot was Padilla's 4 scoreless innings. He might earn a chance to be in the rotation if he keeps up that good work.

I'm hearing some clamoring for Daniel Bard to be installed as closer. Maybe that will eventually happen, but right now the Sox need starting pitching. Because while the bullpen ultimately blew yesterday's game, a good start from Buchholz would have allowed the Sox to cruise to a blowout victory. Bullpens lose games. Starting pitchers win them.

And you know who should be the closer...

People in Boston were far too complacent and docile when the Sox didn't re-sign the best closer they've had in a long time. Everyone who wants Bard to close should also get angry at the Sox for not retaining Papelbon.

The Sox go up to Toronto to face the 2-1 Jays. Doubront faces 21 year old Henderson Alvarez.