The Sox begin 2006 in Arlington, Texas on April 3rd, a Monday. After an off-day, the Sox fly up to Baltimore for their first AL East matchup of the 75 game divisional schedule. If we want to win the division in '06, we've got to win at least 40 games within the division.

The home opener for the Red Sox is Tuesday April 11th against Toronto. The Sox have a 10 game homestand against the Blue Jays, Mariners, and Devil Rays. At not time in 2006 do the Sox have a scheduled 4 city road trip, or 4 team home stand. However, last season, the Red Sox didn't have many homestands against more than 2 teams for much of the early part of the season. It is nice to see that we will have a few lengthy homestands.

Last season, the blatantly artificial scheudling of New York vs. Boston to begin and end the season has not carried over into 2006. The two teams don't play each other until May 1st. They then play 5 times in 11 days, and 11 times in 39 days. Then they don't play for 70 days. Weird schedule.

The interleague opponents for the Red Sox all come from the NL East. Interleague play will begin on May 19th in Philly. Then AL play resumes, then interleague begins once more on June 16th in Atlanta. Then, the Washington Nationals, Philadelphia Phillies, and New York Mets come to town. The Red Sox end regular season interleague play with a trip to Miami to play the Marlins.

Looking at the schedule, the stretch from May 29th to August 3rd, also known as summer, could prove to be brutal. From May 29th to June 18th, the Sox have to play 15 of 18 on the road. This road stretch includes trips to the Rogers Centre, Yankee Stadium, the MetroDome and Turner Field. We haven't really played well in these places recently. Then there's a 9 game homestand, but they're all interleague games. We typically struggle with interleague games. A 10 game roadtrip including 3 in the Chicago brings the season into the All-Star break. After the break, the Sox should be able to feast on KC and Oakland in Fenway, but then they have to do the West Coast trip to Seattle and Oakland. Then its home against 2 90+ win teams, the Angels and Indians. If the Sox want to succeed, we will need to win alot of games early and late in the season because that middle stretch could kill us. 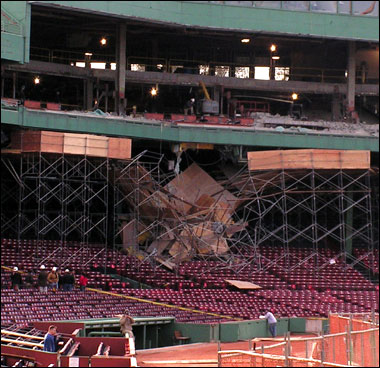 Nobody was hurt as construction scaffolding supporting the .406 Club collapsed the other day at the Small Ballpark in the Fens. This little incident demonstrates the difficulty of renovating a 93 year old building, particularly one with such a strange design. No-one knows what caused it.

Renovating the .406 Club so it is open to the air and not just a giant fish bowl is nice, but when are the Red Sox and the people of Red Sox Nation going to realize that we need a new ballpark? They could pay for some of the stadium by selling of pieces of the old one. Hell, they sold pieces of grass for Pete's sake. Think about it, you've got 35,000 old seats that you can sell at $250 a pop. That's $8,750,000. Then you've got pieces of the dugout, dirt from the field, parts of the bullpen, bricks from outside of the building. I think the only things that should be saved are the scoreboard in the Monster, the foul poles, and Ted Williams' seat. Apart from that, the rest of the ballpark should be torn down, sold as scrap/souvenirs, and a new and better one rebuilt in its place.

Anyway, speaking of rebuilding things, the Red Sox off-season has taken on a few new dynamics. David Wells has asked to be traded to a West coast team, preferably the Padres. Wells has a home in San Diego and even though he signed a 2 year deal, only wanted to pitch for us for 1 season. I don't know what it is about players that want to play out West. The weather is nice, but the fan support sucks for the most part except for maybe in Anaheim.

I think the Red Sox should try to deal Wells, but I don't know how much they can hope to get for him. Especially since everyone knows he wants to be traded. If he does leave, it opens up another spot in the rotation. I think the Sox need to address the problems at the top of the rotation if they want to win the World Series in 2006. We need to get at least a good #1 if not an Ace, and then a good #2 right behind him. We can't depend on Schilling like we all did, for some unknown reason, in 2005. If Wells is traded, it will be the 11th time he's changed teams and if he goes to San Diego, it will be the 3rd time he has pitched for the same team in two different stints.

It's awefully late in Manny's contract to trade him. He's got three years left and then the two option years which probably won't be picked up. Frankly, unless Theo can dramatically improve the pitching staff and not just throw together crappy arms like last season, we need a guy like Manny in the middle of the lineup. We need to keep our offense scoring 900 or more runs in 2006 and without Manny, I don't see how that could happen.

Matt Clement might get arthroscopic surgery on his left-knee. The Sox want him to get it but Clement wants another opinion to confirm the diagnosis and need for surgery.

The Red Sox offered Theo Epstein a three year contract extension worth somewhere around $900,000. I think that offer is somewhat of a joke seeing as Billy Beane was offered $2.5 M over 5 years, and many other big market GMs make much more than what Theo makes.

For some reason, the Red Sox have expressed an interest in retaining the services of Matt Mantei. This baffles me. He sucked for us last season and then he had surgery. So not only will he be rehabbing, he will be trying to correct his poor pitching. That's not the type of risk we should be taking.
Posted by rob at 11:45 AM 2 comments: