Tom Brady was stupid to destroy his phone, but I understand 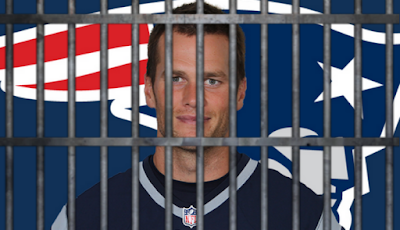 The NFL for some reason needed a few weeks to come to the decision to do nothing about Tom Brady's suspension, and keep it at 4 games. This was announced literally on the eve of training camp, with Patriots players scheduled to report on Wednesday the 29th and Brady himself already in Foxborough. The bombshell with the announcement is the fact that Tom Brady evidently destroyed his cell phone during the investigation.

Frankly, the cell phone being destroyed is impossible to defend or explain. The NFL using the word "destroyed" is intentionally dramatic. It conjures an image of Tom Brady blowing his phone up with an M-80, or dropping it in a river in the wilderness. What actually happened to the phone is probably less theatrical. How many of us actually know what happens when we trade in or donate our phones?

Even if the phone was the smoking gun, you still don't destroy it. You just refuse to hand it over. You accidentally leave it next to a magnet, or drop it in the pool, or lose it while hiking, or let Gronk spike it into oblivion as an apparent joke.

It was not smart for Brady to have his phone "destroyed."

But I understand it. The witch hunt atmosphere created by the NFL's leaks and the media firestorm around this story would make it difficult to consistently make calculated and correct decisions. Brady couldn't simply admit guilt for this misdemeanor because it was being treated like a felony. Admitting guilt would tarnish your legacy and everything you've worked for your entire life, not to mention demoralize your teammates before the biggest game of their lives. Brady couldn't be honest so all he could do was shape, twist, and hide the truth as best as he could.

Some people are good at hiding the truth and deceiving people. You don't even notice them. Others aren't very good at it.

I'm not going to defend Tom Brady as innocent. I am going to point out how absurd this story has been from the beginning. This was a set-up. This was Brady getting caught stealing a candy bar and getting charged with grand theft auto, because some elements of the NFL want to see him pay.

Brady evidently broke a rule, got caught, and didn't come clean. He should be punished for violating the initial rule, which was an equipment violation. Should he be punished for obstructing "justice?" I'm not so sure. The NFL didn't seem to be seeking justice, it seemed to be seeking to destroy his reputation. That's vengeance, not justice.

Pedro Martinez is greatness beyond greatness 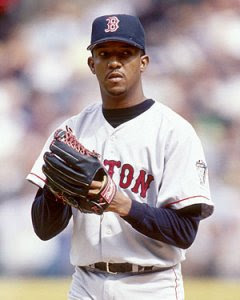 Pedro Martinez was by far the best thing going during the Great Boston Sports Depression between Larry Bird and Tom Brady. Before Boston teams won Super Bowls and World Series, all we fans could be proud of was a skinny, cocky, unbelievably dominant Dominican pitcher.

It can be difficult to remember the mindset we had in the late '90s and very early 2000s, before the Patriots won the Super Bowl, before the Curse was Reversed, before Boston teams claimed 9 titles in 14 years. And with the abundance of Boston sports heroes in this young century (Brady, Ortiz, Garnett, Thomas, and so on), we kind of forget how special Pedro Martinez actually was, and how for a few years he provided us with that feeling of joy and sense of superiority once every 5 days. So let's remind ourselves of his greatness beyond greatness.

He won 3 Cy Youngs in this stretch, and probably should have won an MVP. But we'll get to that later.

While sluggers were smashing Roger Maris' single-season HR record, Pedro was challenging Bob Gibson's ERA record (which was set on a higher mound, and with pitchers batting). Pedro Martinez did more to limit offense in the steroid era than mandatory PED testing eventually did.

His playoff performances were legendary
In Game 5 of the 1999 ALDS against Cleveland, Pedro Martinez pitched 6 no-hit innings of relief in the deciding game of the series. Despite his arm being worn out and his fastball considerably slowed, he held an offense that had scored 1,000+ runs that season, to zero hits. Manny Ramirez, Jim Thome, the Alomars, Kenny Lofton, all of them failed to get hits off Pedro. He entered the game when it was 8-8, the Sox won 12-8, and claimed their first playoff series since 1986.

Then in Game 3 of the '99 ALCS, Pedro beat the Yankees with 7 scoreless innings. He only allowed 2 hits and struck out 12. It was New York's only loss of the post-season.

He could have been the winner of Game 7 of the 2003 ALCS if not for poor management. Had Grady Little gone to the bullpen to finish the game, few people in Boston would know who Aaron Boone was. Pedro was brilliant for 7 innings, then began to falter in the 8th. Had he been removed, the Red Sox probably would have gone to the World Series, and had a good chance against the Marlins.

He was a big part of the Red Sox winning the 2004 World Series
Since we tend to associate Pedro so much with the pre-2004 era of Red Sox history, we forget how vital he was to the Sox winning the World Series in '04. Not only with his pitching, but just with his presence. His presence on the team made the Sox a contender, and the new ownership parlayed that in their pursuit of players like Curt Schilling. Pedro was also part of that team's loose yet confident attitude. 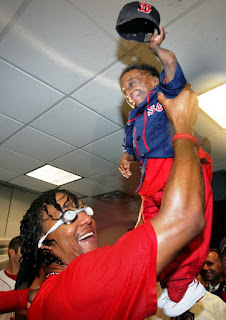 He wasn't that great in the 2004 regular season. And in the ALCS against the Yankees, he struggled. However in Game 3 of the World Series he threw 7 scoreless innings, allowing only 3 hits. This was a great post-season start in the most important series in Red Sox history this side of 1920, and Pedro's pitching was a major contribution.

He should have won the MVP in 1999
Apart from Pedro and Nomar, the 1999 Red Sox weren't very good. Jose Offerman, Wilton Veras, Damon Buford, Darren Lewis, Reggie Jefferson, Ed Sprague. The #2 pitcher was Bret Saberhagen, when he was healthy. Then there was Mark Portugal, Pat Rapp, and Brian Rose. John "Way Back" Wasdin was still out in the bullpen. It wasn't a very good team. Yet they won 94 games. They were 25-5 (.833) when Pedro started, and 69-63 (.523) when he didn't. I'd say he was quite valuable to that team's success.

He had an ERA of 2.07, struck out 313 batters, had a WHIP of 0.923, was AL Pitcher of the Month 4 times, and led the AL in WAR. He only allowed 9 homeruns in 213.1 innings (1 per 23.7 innings). He came in 2nd in MVP voting, behind Ivan Rodriguez. Why? Because some people didn't think a pitcher should be eligible for the MVP because they're not "every day players." Pedro got one more 1st place vote than Rodriguez did. But some voters felt that the Cy Young was for pitchers, the MVP was for positional players, and left Pedro off their ballot. So I-Rod won.

He threw a perfect game, but not really, but really
In 1995, Pedro retired every batter he faced for 9 innings. However, after 9 innings the Expos and Padres were still tied 0-0. The Expos scored in the 10th, but Pedro allowed a double in the bottom of the inning and was relieved. So he didn't even get credit for a shutout, let alone a perfect game.

Nevertheless, he still pitched 9 perfect innings, still retired 27 straight batters from 1st to 9th. And a ball from the game is in Cooperstown with other balls from no-hitters. 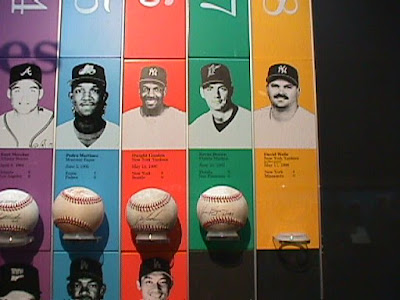 Pedro was often on teams that didn't support him very much. We can only imagine how much higher his winning percentage would be if he had more help.

The abundance of absurd but true Pedro stories
Remember his performance in the '99 All-Star Game? He struck out Hall of Famer and 12 time All-Star Barry Larkin. Then Larry Walker, who was hitting .382 at the time. Pedro then punched out Sosa and McGwire, who had combined for 136 homeruns the year before and hit 128 in '99. After Matt Williams reached on an error, Pedro struck out Jeff Bagwell and I-Rod threw Williams out trying to steal second. The most impressive 2 innings pitched of all time.

Remember the 17 strikeout one-hitter against the Yankees?

Remember the no-hit bid against the Devil Rays after he hit Gerald Williams with a pitch?

Remember when the Red Sox played a 19 inning game in Seattle in 2000, then Pedro saved the bullpen the next day with an efficient complete game? It was one of his most impressive demonstrations as a pitcher. He only struck out 7 (he was averaging 11.8 K/9 that year), instead pitching to contact and inducing 14 groundballs (including 2 GIDP) to keep his pitch count low. He won the game, and saved the beleaguered bullpen.

His stuff was amazing. And when his fastball gradually lost its ferocity, his accuracy and pitching acumen allowed him to remain elite. He was an artist. He was one of the smartest players in the game and one of the goofiest. He had a small body but big balls. He dominated, he enraged, he impressed, he intimidated, the game revolved around him when he was pitching.

You absolutely had to watch his starts. You coveted tickets to see him pitch in person at Fenway. Each start had a realistic chance to be a no-hitter or a 20 strikeout game. You learned Spanish because of him. Pedro didn't just dominate the game, he dominated the lives of Boston sports fans. 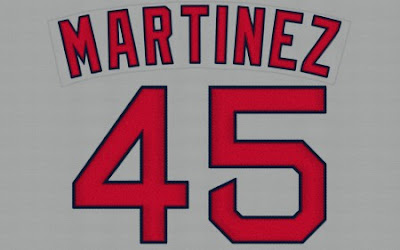