Excellent action from the Conference Semis. One blowout this weekend, but most games were eye-glued-to-the-screen thrillshows.

Don't let the scoreline fool you, the goaltenders were actually the best players in this game. The Bruins led for most of it (53:59), but Philly was never down by more than 2 goals, and seemed to answer whenever challenged. Marc Savard had the game-winner in his first game back since Matt Cooke's cheapshot. But the B's also lost Marco Sturm 41 seconds into the game. This series might be the most entertaining of all the Conference Semis to watch. 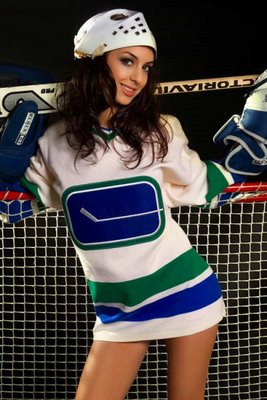 Vintage Luongo as the veteran Canuck goalie stopped 36 of 37 Chicago shots. Patrick "has a book on Luongo" Kane ended the shutout bid 2:07 into the 3rd period. But that was far too little, much too late. Vancouver got offense from their usual suspects: Christian Erhoff had a goal and an assist, Ryan Kesler had 2 assists, and Henrik Sedin scored a goal. But I doubt Luongo will be this good, or Antti Niemi this bad as the series progresses. 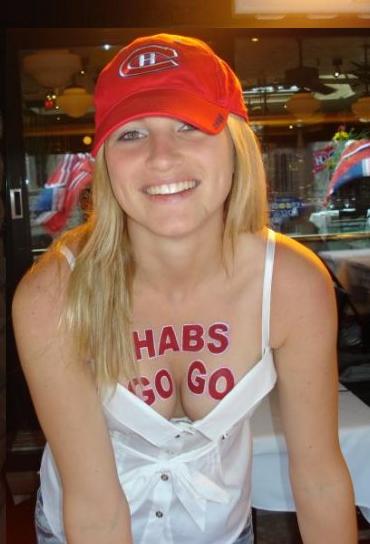 Pittsburgh dominated Game 1 Friday night, but the Habs responded. Halak was foggy in Game 1, but his visibility returned to him as he stopped 38 shots. Mike Cammalleri continued his Conn Smythe campaign by scoring 2 goals, his 7th and 8th of the playoffs.

Pittsburgh might be the dirtiest team in the NHL, at least among good teams in the East. Not only do you have Cooke, but with 2:24 remaining and down 3-1 Craig Adams boarded Marc-Andre Bergeron in a pretty blatant "message sending" hit in the corner. He received a 5 minute major and 10 minute misconduct. But I doubt the NHL will have the balls to suspend him.

There's just nothing to like and little to respect about the Penguins.

There is something to respect about San Jose. The Sharks can play the puck-possession game almost as well as Detroit. But their possession leads to goals thanks to their finishers. Joe Pavelski scored twice and had an assist. The Dude has been a monster in the playoffs, with 9 goals, 5 assists, and a +7 rating. Joe Thornton also had a goal, albeit by accident. The Red Wings spent too much time in the box (that's what she said). They allowed 2 power play goals on 10 such opportunities. 10 power plays is far too many for a disciplined team of veterans to allow. San Jose, to their credit, only yielded 4.

Oh the intrepid Red Sox, experimenting with the fundamentals of baseball, using equations to determine which outfielder should play where, and utilizing medical professionals so ingenious and ahead of their time that few contemporary doctors ever agree with their diagnoses.

It was "closer by committee" a few years ago. An idea which failed due to a lack of talent in the committee, rather than the notion itself. The likes of Chad Fox and Ramiro Mendoza weren't capable of mid-relief by committee, let alone closing. Put Rivera, Hoffman, Papelbon, and Nathan in the same pen, then closer by committee would excel. Almost as if having the skill makes the scheme a success.

And now it's "run prevention." Before the season, I accused the Sox Front Office of trying to pull the wool over our eyes, by feeding the public with a bunch of numbers that showed the Sox would clearly score fewer runs, but they'd also allow much fewer.

It's still early, but the Sox have actually scored a decent amount: 114 runs, 14th in the Majors. But they've allowed far too many, especially for a team allegedly built for "run prevention." 134 runs allowed, 4th most in the Majors.

This team has not been built for "run prevention." If it had been, Alex Gonzalez would've been retained at short-stop. He should've won last year's Gold Glove. If you're building for defense, why would you get rid of the best defensive player at the most important defensive position?

Which do you think prevents fewer runs? A Gold Glove calibre center-fielder or a strong bullpen? Well the Sox have one of these. The one that isn't the answer. And Clay Buchholz isn't the answer to the pen's numerous problems. That unit is more than one piece shy of completing the puzzle.

And the rotation could hardly afford to lose Buchholz. Because Daisuke Matsuzaka is a complete unknown. Everything about him is a question mark. His health, his attitude, his durability, his control. It's cute that he can throw 8 different pitches, but can he PITCH just 3 good ones? Another example of the experimentalist Sox toying with the fundamentals of the game.

This team will improve, but not by much. Just enough to be able to beat the likes of Baltimore and Toronto. Victor Martinez is not a .233 hitter. JD Drew isn't a .215 hitter. David Ortiz isn't a .159 hitter (he's a .238 hitter). Lester and Beckett are better than they've been.

But don't expect to make the playoffs. There are too many holes on offense. The pitching is solid, but it lacks Aces. It's like a hand in poker with lots of nice cards, maybe 4 to a flush or a straight, but it's insufficient, missed on the river. That's a good analogy actually. The starters might give 6 or 7 good innings, give your hand some explosive potential on the flop and turn, but the bullpen bricks on the river.

Besides, the rotation is nowhere near good enough to contain the explosive offenses in New York and Tampa Bay. At least not enough to allow the Sox' mediocre offense to prevail.

Call me pessimistic, but how many days until pitchers and catchers report in 2011?
Posted by rob at 12:00 PM No comments:

How many times has it happened this season? The Celtics are good enough to dominate teams like Orlando, Cleveland and LA. So long as the games are 24 minutes long. The C's were up by 11 at halftime, but lost a war of attrition in the 3rd. LeBron James hit a layup to give the Cavs a 79-77 lead going into the 4th. The trench warfare continued in the final quarter, but Cleveland was simply better, and the Celtics didn't have that extra gear at the end.

The overly optimistic Green & White faithful have been repeating their "wait for the playoffs" mantra. And they seem vindicated by the Celtics' performances against Miami. But Miami is not Cleveland. Dwyane Wade is not LeBron James.

Speaking of James, is there any doubt that he's hamming up this shoulder injury? The left-handed free throw attempt in the Chicago/Cleveland series was a prime example of LeBron's attempt to win an Oscar. If a fucking FREE THROW is a threat to your health, then how can you play 43 minutes of basketball?

He has a sore arm, but he also wants to have some heroic Willis Reed moments. So he's embellishing. He wants people to say "Not only did LeBron put up 35 against the Celtics, he did it with a bad shoulder! What a great guy!"

The Celtics need to penetrate more later in games. But that's also a good way to wear out even faster. And Ray Allen needs to get hot. This is kind of why I dislike Ray. His contribution just seems like random dumbluck. He'll have his 28 point, 5 for 6 from beyond the arc nights. But he'll also have mediocre nights (14 points, 2/7 on 3 pointers), and dreadfully awful nights.

But against Cleveland, the Celtics need to be running on all cylinders, and that means it's up to the seeming randomness of Ray Allen. Well it's not random, he's an amazing shooter. But there is an unfortunate and frustrating mathematical variance to his game.

Game 2 tonight at 8. Something to watch in between periods of the Bruins' game.

In my preview of this series, I remember writing "do not expect many 5-4 games this series." Sometimes being wrong can still feel so right.

How fitting, how poetic. The only thing to make the end of Saturday's 5-4 OT win even more satisfying would have been if Matt Cooke had simultaneously suffered a heart attack while watching it. And Randy Jones fell off a 50 story building.

Now let's put this win in perspective. Philadelphia looks good. Very good. Brian Boucher was spot-on, and deserved the 2nd or 3rd star. 41 saves, including 14 in overtime until Savard broke through. Briere had an excellent game, considering he had to play center. Pronger was Pronger. And the Flyers won a majority of the faceoffs, which proved extremely critical.

That's sufficient praise of the Philly Phuckos, at least for now.

Back to Savard. With Sturm injured on the first shift of the game, and a rusty Savard, the B's were short of forwards all game long. Savard did log 15 minutes of ice time, but that was hardly according Claude Julien's pregame designs. He actually saw most of that time as a winger with Bergeron and Recchi.

Bergeron and Recchi seem to have been a part of every single Bruins goal this postseason. And Satan seems to be on the ice for most of them too. These three have 9 of the Bruins' 21 postseason goals.

Dennis Wideman had 3 assists in this game. How monstrous has he been for the B's both defensively and offensively? Although he and Hunwick could have done a much better job stopping Briere on the game-tying goal.

Tuukka Rask let in a somewhat soft goal in this game, but he absolutely robbed the Flyers of 8 or 9 more. That's excellent goaltending algebra. He's calm and poised as much as he is athletically primed to pounce. He doesn't allow a bad goal to phase him. And he seems to gain more confidence every game.

Now the Bruins had no business going into overtime in this game. But do give credit to the Flyers. It's not as if the B's "took their foot off the gas." Philly played well, and deserved to come from behind. The Bruins did miss their opportunity to win this game in regulation. Several opportunities. And they all came in the 1st period. The B's were up 2-0, utterly dominating the flow of the game, but whiffed on some big scoring chances. Instead of a 3-0 or 4-0 game going into the intermission, Philly still had a heartbeat, and a chance. And they knew it.

Michael Ryder is not a scorer. He didn't have a bad game. In fact, his neutral zone play was outstanding, evading multiple Flyers and triggering 2-on-1 opportunities for his teammates. But in the OT period, a beautiful centering pass found his stick. And he settled the puck. A puck which was already as settled and calm as a turtle on valium. Yet he still took time to settle the fucking puck. This allowed Boucher to swing himself across the crease, and stop Ryder at point blank range.

Did anyone notice how much time Savard took to settle a bouncing, rollicking puck?

No time whatsoever. Savard shot the puck right away. Because that's how you score. Don't give the goalie time. Surprise him. Make the game too fast for any human goalie to thrive in.

And to all you Timmy Thomas haters out there, watch that clip, and see who the first guy to congratulate Tuukka Rask is (at 0:22). Thomas has been ousted Drew Bledsoe style, but he's also shown the class of Drew Bledsoe in that unenjoyable backup position.

But let me once again implore that we all keep this in perspective. This was one game, and the Bruins barely won it, on home ice. Marco Sturm's status is a looming question mark. The Flyers cracked the B's vaunted Penalty Killing unit. There's a lot of hockey left.

But it's still very nice, isn't it?

Game 2, tonight on Versus.