Antonio Brown acquisition: Let's not queue up the quacking duck boats yet 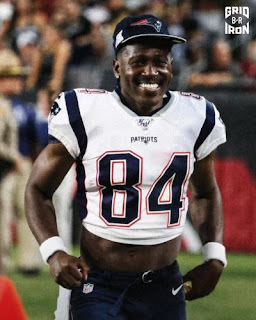 The Patriots have signed star receiver Antonio Brown. Understandably, we're all excited about this acquisition. Look at the Pats' receiving options: Gordon, Edelman, Thomas, and then add a guy who has caught 100+ passes for 1,200+ yards each of the past 6 seasons. It's absurd.

But let's pace ourselves here and wait until Brown is actually catching touchdowns before we start celebrating them. Let's also wait to see if Gordon can stay clean between now and February, if Edelman's concussed brain can last another year of relentless hits across the middle, if Demariyus Thomas can recover and carve out a role here.

I'm not being negative. I'm happy with this move. And if Brown is a problem the Patriots will jettison him without hesitation. I'm pleased, but not ecstatic. I'll enjoy Antonio Brown's performance one catch at a time, not all at once before it even happens.

Patriots fans have a problem of anticipation and expectations. And it ruins their enjoyment of this team's success. They expect a 14-2 (or better) season with multiple touchdown margins of victory most weeks. So when that happens they don't even enjoy it. And when the Pats don't meet those lofty expectations, the fans act like the team hasn't won 6 rings, or been to 8 straight AFC title games. They don't fully enjoy watching the high quality of football being played in Foxborough. It's like sitting down to a perfectly cooked steak dinner, but instead of taking our time to savor each juicy bite, Pats fans put it in a blender, liquefy it, and chug it down in one gulp.

I don't know how much Antonio Brown will contribute to the 2019 Patriots. He certainly has a huge ceiling. He could be a huge bust. But I'll wait until he's making big plays to celebrate his big plays. One game at a time, one play at a time.