This news isn't surprising at all. Bill Belichick put his hands on an official, that's against the rules, so the NFL has to punish him. Considering the lack of maliciousness with the contact, a suspension would have been too much.

It makes sense. Kyle Shanahan got fined $25k for pursuing then berating officials after a game. This was one step worse than that as Belichick actually made physical contact.

I don't think there will be many more incidents like this one, especially from Belichick. He crossed a line, the NFL has penalized him, and he won't cross it again.
Posted by rob at 4:30 PM No comments:

Give Pedro Martinez and Kevin Millar a TV Show

After watching Pedro Martinez and Kevin Millar on NESN's broadcast of the game last night, and being thoroughly entertained by it, I want to see these two guys on my TV more. They should have their own show. Maybe even their own network.

We could be obvious and give them a baseball or sports talk show. But that's not taking full advantage of how much range these guys have. Here are pitches for some show ideas:

Hunting and Fishing show
Millar can shoot deer, Pedro can chase chickens. And I think if you put these two guys on a high speed powerboat in the middle of a lake, provide them with a few liters of rum, you're going to get an entertaining fishing segment.

Cooking show
Millar seems like a guy very familiar with Chef Boyardee and microwave cooking. Mix that with some spicy Dominican cuisine. Spaghetti and meatballs in salsa.

Soap opera
Spanish language soap operas are awesome. The women are gorgeous and all the actors are so obvious with their emotions that you don't need to speak Spanish to grasp what's going on. Just imagine a typical Spanish soap opera... with Kevin Millar as a character.

Dating show
Get a guy, get a girl, send them on a date, have Pedro and Millar each coach a date and give them advice. Then viewers vote on who did the best job coaching their date.

Detective show
Millar plays an old school, shoot from the hip, wild west sheriff. Pedro plays a nerdy, by-the-book, desk-job officer from the suburbs. Together they have to solve animal related crimes. Manny can play the street smart veterinarian.
Posted by rob at 11:00 AM No comments: 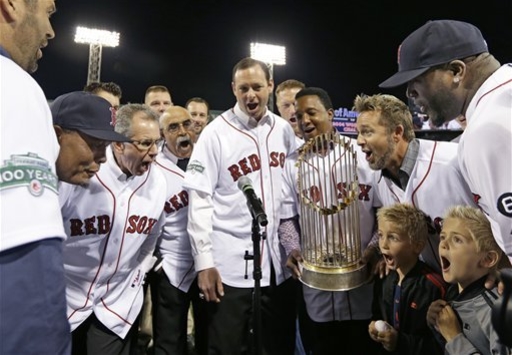 Last night the 2004 World Series winning Red Sox team was honored at Fenway Park. For some reason, the Sox chose to commemorate the 8th anniversary of this event. Whatever. Must sell tickets. Must continue streak.

Compare the 2004 and 2012 Red Sox and the differences are extreme, top to bottom, on the field, in the clubhouse, inside the Front Office.

The pitching was better in 2004. They had two potential Hall of Famers in Pedro Martinez and Curt Schilling. Then solidity after that with Wakefield, Lowe, and Arroyo. 933 combined career wins from those five guys.

The hitting was also better. Assisted by PEDs, David Ortiz and Manny Ramirez were the best 3-4 combo since Ruth/Gehrig. The Sox led the AL in runs, OBP, and SLG. The 2012 Sox offense is inconsistent, 4th in runs, 7th in OBP, 6th in SLG.

The 2004 Sox had a better attitude. The players were laid-back. They had a Manager that allowed that easygoing attitude. Kevin Millar, Johnny Damon, Manny Ramirez, and David Ortiz were entertaining characters. Quieter guys like Bill Mueller and Derek Lowe seemed to enjoy the Millar/Manny sideshows drawing all the attention.

The Manager also balanced a pair of prima donnas (Pedro and Schilling). Both of them remained focused on the same goal: winning. Terry Francona got the most out of those two just like General Eisenhower got the most out of Patton and Montgomery in World War II. Francona kept everything low key.

In 2012, Bobby Valentine goes out of his way to keep players on edge. He criticizes them in the media, and he doesn't move on and let things go.

The GM is different too. In 2004, Theo Epstein had the balls and the authority to trade Nomar. Could you imagine, in a pennant race, Ben Cherington being allowed to trade a star player?

Players, managers, and GMs change. But the ownership is still the same. Or is it?

In 2004 the owners owned just the Red Sox. They had no other concerns. And their only goal was to win the World Series, at all costs.

Now they own a struggling soccer team in Liverpool. And the aims of the Red Sox is scattered and out of order. It's tough to figure out which objectives are the most important for them. They have to sell tickets, use the media to besmirch ex-players, lie about sellout streaks, market the ballpark, overspend on free agents, and somewhere in this mess of priorities is trying to win ballgames.

In 2004, the Red Sox were John Henry's biggest concern, his main focus. Now, when the '04 Sox are honored at Fenway, the owners aren't even present.

The Sox were once Fenway Sports Group's entire empire. Now they're just a colony, and Larry Lucchino is the Imperial Governor, appointed by King John to run day-to-day operations.

But Larry Lucchino hasn't run the Sox, he's ruined them.

The way ownership operate this team is the biggest difference between 2004 and 2012.