Peyton Manning is an Excellent Tipper

I was going to write a post blasting Peyton Manning for having other priorities ahead of winning, and for being scared to leave the AFC. It was going to be a post that did quite a bit of reaching, but I'm never one to decline an opportunity to mock Peyton. Then I saw this story. This is a tip Mr. Manning left at the Angus Barn in Raleigh, NC:

Unfortunately for the waiter, he got fired after he posted the bill onto Twitter. The restaurant probably doesn't like the idea of people worrying about their tips (and the last 4 digits of their credit cards) potentially being posted online. 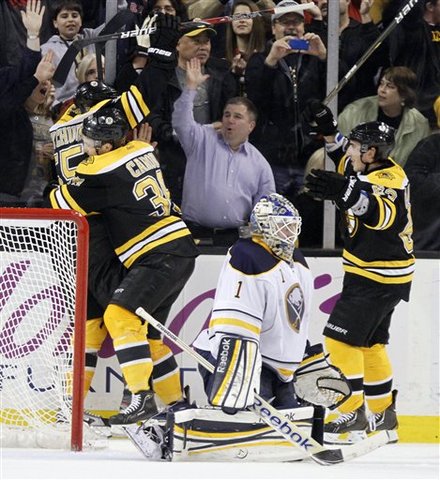 It was a significant improvement compared to Tuesday's win. One 1st period mistake cost the Bruins a goal, but for the most part they were solid in the first and second periods. They were then great in the 3rd.

This game reminded me of some of the Bruins' wins in November and December. Not utterly dominant, but they didn't get significantly outplayed at any point. And Thomas made some huge saves to keep it a 1-0 then a 1-1 game. And eventually, the B's overwhelmed their opponent.

Boy did I miss Johnny Boychuk. He dispensed a few big hits, then scored what wound up being the game-winner. He hasn't scored in about 40 games, and with so many forwards either injured or struggling, the B's need a guy like Boychuk to occasionally contribute on offense.

Speaking of defensemen getting involved, it was Chara who helped trigger the Bruins' 3rd goal. It was just a simple pass to get out of the zone, but with the speed of Lucic, Krejci, and Seguin, a goal soon resulted.

The B's play back-to-back games this weekend. They host 8th place Washington Saturday afternoon, then are in Pittsburgh on Sunday. The Penguins are technically in 4th place, but they have the 2nd best record in the East. I'd expect Turco to start Saturday, then Thomas on Sunday.

The Bruins remain 3 points ahead of Ottawa with 3 games in hand.