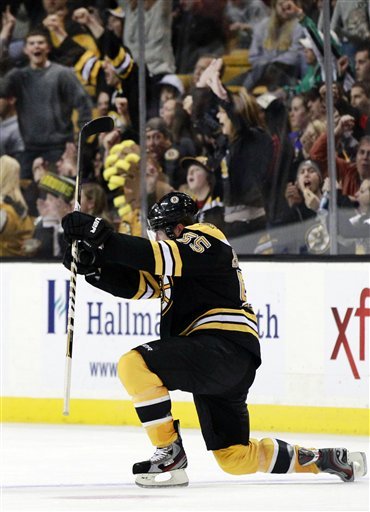 Was this the turning point to the Bruins season? It could be. They did some things that we hadn't seen, at least not for extended periods of time. They won battles. They supported the puck. They took care of the puck. They scored breakaway goals. They moved the puck and their bodies well on the Power Play. They did everything with a purpose and an intent.

They also did the good things that they've been doing all year. Great goaltending. Forwards helping the defensive layers. And excellent penalty killing, which was particularly important because Ottawa has been winning thanks to their Power Play's effectiveness.

Most of all, the B's were patient. Ottawa benefited from some weird bounces (a goal off McQuaid's chest, a goal assisted by a ricochet off Corvo's back), but the Bruins didn't get flustered and stuck with their gameplan. They responded well to Ottawa's goals, and responded well after scoring their own.

The Bruins' goals were products of patience. Chara was patient on Lucic's PP goal. He held on at the point, moved into a better shooting lane, then let it rip. Lucic was patient once the rebound found his stick. He knew he had time to settle it then shoot high. He didn't panic, didn't just smack at it.

Seguin was patient on Bergeron's goal. He had options, knew Bergeron was the best one, but he waited for Filip Kuba to shift his stick before passing tape-to-tape to Patrice.

Seguin led all forwards in Time On Ice, and you can easily understand why. Not only are his offensive skills and awareness improving with every game, he's become a smart defensive player, too. In his sophomore season, he's no longer adjusting to life in the NHL. He's forcing the NHL to adjust to life with Tyler Seguin.

In order for this to be a turning point, though, the Bruins need to build on it. Unfortunately they once again have an expansive period between games and don't play again until Saturday night in Toronto.