88 WAYS TO BEAT THE HEAT 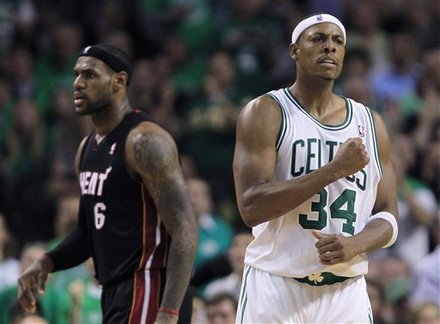 Yes, this game represents 1.2% of the regular season; a meaningless morsel of what is a meaningless stretch of 82 games. But you know what, all off-season, it's been "Miami this," and "LeBron that," and "New Big Three those," et cetera. The Celtics reminded the rest of the basketball world that there are some pretty good teams outside of Miami.

This game was also a reminder that the Celtics have Rajon Rondo, and Mr. Rondo had 17 assists. Ray Allen had a great shooting night, which we all know is something that will come and go, but led the C's with 20 points. Pierce had 19, Glen Davis contributed 13 from the bench, KG had 10, Shaq had 9. KG also had 10 rebounds, Pierce had 9, Shaq had 8.

LeBron James put up 31 points. None of his teammates did much offensively. Wade had 13. That's nice, I guess. The Heat only had 15 assists compared to the 25 the Celtics compiled.

Some ridiculously optimistic Celtics fans out there will proclaim this as definitive proof that the Celtics are still atop the Eastern Conference. That's really stupid to suggest after only one regular season home game. Especially since the big question for the aging Celtics isn't "will they have it in Game #1?" It's "will they have it in game #91?"

But at the very least, the Celtics demonstrated that the game isn't played on paper. Champions aren't determined by hour-long ESPN specials

Game #2 comes quickly as the Celtics play in Cleveland tonight.