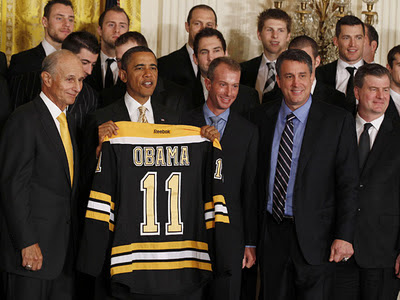 The Florida Panthers are in town tonight to play the Bruins. That means Tim Thomas... will likely be inactive due to lower body issues. The former Bruins goalie, who won two Vezinas and a Conn Smythe in Boston, won't be between the pipes. He made the trip but we'll see if he even dresses.

Look, I think criticizing Thomas for the way he de-activated himself is a legit criticism. And I can even understand blaming his on-ice performance for the team's struggles in 2011-12. Those are rational. They make logical sense. In my opinion I think what he did for this team overshadows that lackluster 2011-12 season. And I think the way he exited the team shouldn't dictate how we view his entire Bruins tenure. You may not like how he left, but you have to appreciate what he did while he was here.

However, when you continue to criticize him for not going to the White House, you're venturing away from logic. You need to get over that. It was years ago. He made a political statement. Who cares? People make political statements all the time and we ignore them.

The people who criticize Thomas then go on lectures about him being "selfish" and creating a distraction for his team. Several more logical leaps and bounds later and suddenly Thomas' absence at the White House is responsible for the team's struggles that season. Media people, like Tom Caron on WEEI today, blame Thomas for forcing his teammates to answer questions about the event. Then they blame that distraction for the team's difficulties.

There is nothing more outrageous to a member of the media than refusing to answer their questions. It appalls them. And media people will invariably find a way to turn your lack of cooperation with them into something with a broader impact. In this case, Thomas didn't talk to the press about the White House, so that forced his teammates to talk (because I'm sure the media would not have asked them questions had Thomas talked), and that distracted a team of grown men from playing hockey at 100%. Thomas' selfishness was the reason that a Championship winning team wilted in the First Round a year later.

Thomas was the reason Bergeron and Lucic failed to score in that playoff series. Thomas is the reason Krejci and Marchand only scored one goal apiece. Rich Peverly was somehow immune because he scored 3 goals. Maybe Pevs was a member of the Tea Party.

I will blame Thomas' on-ice performance for the team's struggles in that series and that year. That's a fair complaint. He was not the same goalie in 2011-12 as he was in 2010-11. He looked kind of like he looks this season. Slower. Clunky. Borderline clumsy. Thomas could only manage to play in 59 games that year. And in 2011 he only played 57 regular season games. Then 25 playoff games. He was worn out.

I'm tired of the White House non-visit being blown out of proportion. I'm tired of media people getting sanctimonious whenever an athlete dare refuse them an interview. I'm tired of Thomas doing something off the ice being blamed for a team's struggles on the ice.

Tim Thomas was a great goalie. He was a weirdo. He left town in a selfish way. And once he didn't want to go to the White House. The end. Get over it. At 7:30pm Eastern on Fox Sports 1, undefeated Baylor hosts 7-1 Oklahoma. The Bears are ranked 6th in the BCS and in order to keep any National Championship hopes alive, they must win out. They're also in a tight conference battle in the Big 12. Oklahoma is also involved in that fight with a 4-1 conference record. The #10 Sooners must beat Baylor then hope Texas (5-0 in the Big 12) lose in the conference.

At 9:00pm on ESPN, #5 Stanford hosts #3 Oregon. The Cardinal are Oregon's biggest roadblock to an undefeated season and possible National Championship berth. Stanford have the 19th best scoring defense, allowing less than 20 points per game. The Ducks have the 2nd best offense in the country, averaging 55.6 points per game. Tonight will be the hardest test for both units.

I think Oregon loses a close game, probably due to some special teams mistake. And Oklahoma upends Baylor in a not-so-close game. Then huge sighs of relief will rise up from Tuscaloosa, Tallahassee, and Columbus.
Posted by rob at 10:00 AM No comments: