My kids are always hopped up on sugar and I want to make sure that it doesn't stay that way. I'm realizing that it is possible for kids to like some great tasting healthy snacks. Even though I assumed for years that I would never get my kids to eat healthy stuff. Some of my friends feed their kids healthy food and I would like to get my kids to eat that way too.

I've been looking around online to find some ideas about how to get my kids to make that transition without ending in lots of tantrums. One thing that I found online during my research was some info on how to consolidate your credit cards. I was really happy to find it because that's another family issue that I need to address.

I'm chocked full of all kinds of great nutritious snacks ideas and I really hope that my kids are going to like all of them. But I think that my husband and I are going to have to lead by example and at least act like we like these snacks for the kids to enjoy them.

Email ThisBlogThis!Share to TwitterShare to FacebookShare to Pinterest
Labels: Advertisement 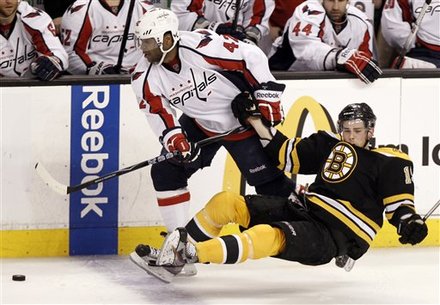 If the Bruins play as well as they did in Game 5, they'll probably win. The Caps' victory was by the narrowest of margins, and the Bruins were the superior team.

-Holtby looks human. The Bruins are getting bodies in front of him, forcing him to move through traffic to make saves. They're also finding his holes. And how many times did he let a puck slip through his glove hand?

-The Bruins hit two posts in the 1st period. Unlike some, I don't believe that hitting a post is bad luck. It's a miss. Just like a basketball hitting the rim is a miss. But it is a close miss. If those two shots are aimed just a few millimeters better, the Bruins take a 2-0 lead and force Washington to play from behind.

-David Krejci has sucked in this series. All he does is miss shots, turn the puck over, and lose important faceoffs. Yesterday Lucic gave him a golden chance in the slot. Krejci was 8 feet from the net, and missed the net by about 8 feet. That's pretty sad.

-I'm tired of seeing Joe Corvo on the ice. I'd rather have Mottau. Corvo isn't bad, but he's not good. He's like a friend who isn't a bad guy, but just isn't any fun to hang out with. At the very least, he shouldn't be on the ice when the B's have a Power Play. Chara, Seidenberg, Boychuk, Ference, and Rolston should be playing the blue-line in those situations. Remember how well the Bruins played when they scratched Corvo late in the regular season.

-The slashing call on Pouliot was bullshit. The odds of what he did being called for a penalty in the 3rd period of a tied playoff game are astronomically slim. And if a premier player like Ovechkin or Bergeron had done it, there's no way in hell the refs would have called it. Thomas still should have stopped the winning goal, and the B's still allowed 3 other Washington scores, but this particular call was utter crap.

-Some people are trying to blame Thomas for this loss. The winning goal was one he should have stopped, but he was brilliant in the 1st period and the first half of the 2nd. He's been excellent all series long. He's been the best penalty killer and he's the reason the Bruins have been able to stay in these close games despite their offensive struggles.

-The Bruins are two or three plays away from beating this Capitals team into the ground. If they can score early and force Washington to play from behind, you'll see the Caps fall apart. The Bruins, for the most part, played great in Game 5. If they play that well in Games 6 and 7, they'll win.

Photo Credit:
AP Photo
Posted by rob at 9:13 AM No comments: