Bruins Have Another Epic Game Against the Rangers 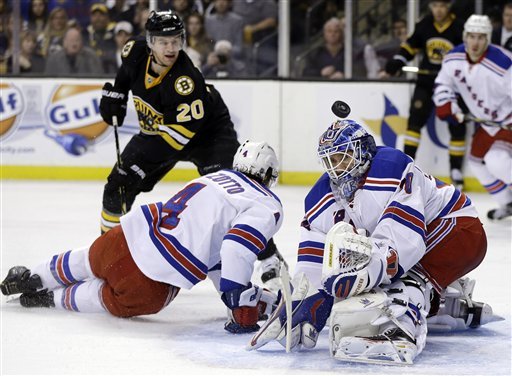 A playoff matchup between the Bruins and Rangers might scare some, but it wouldn't bore anyone. These teams once again played an exciting, unpredictable, closely fought game. It's kind of a shame that they won't face each other for the rest of the regular season.

The difference in this game was goaltending. Henrik Lundqvist was frighteningly sharp. He is the reason the Rangers are such a potentially scary team to face in the playoffs. He has the potential to be what Jonathan Quick was last spring, and what Tim Thomas was in 2011.

On the other side of the ice was Tuukka Rask. Rask has been brilliant this season, but last night he was a bit of a sieve. He could have stopped 2 of New York's 3 goals. And certainly their 3rd one should have been stopped.

So Lundqvist was excellent, Rask was not his best. Even still, the Bruins managed to fight back and salvage a point. And that's why we love them. Their fire, their tenacity. They don't give up, they don't make excuses. Are you paying attention, Red Sox? There are two teams in Boston playing right now that do not quit, and that's why their fans love them even after they lose.

This game wasn't just about goaltending. The Bruins made some mistakes, the Rangers capitalized on them. Give some blame to guys like Milan Lucic, but also give credit to Derek Stepan and Anton Stralman for their unassisted goals.

In a potential playoff series with the Rangers, the Bruins can't afford such mistakes. Nor can they afford an inept Power Play, or a goalie that lets in bonus goals. But the playoffs are many weeks away. It's still February, the Bruins are still 8-1-2.

The Bruins are starting a 5 game road-trip and won't be home again until the 28th. They're in Buffalo Friday night.