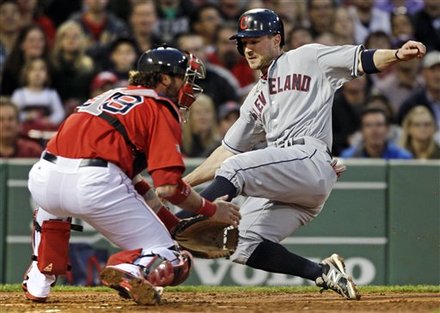 Clay Buchholz is 4-1. Talk about having good luck. This was his best start of the year, and first Quality Start. He allowed 8 hits, walked 3, and couldn't finish the final inning he started. He's had trouble going through a lineup more than 3 times. More than 2 times, actually.

He was saved by Pedroia, who went 3 for 4 with a double, a sac-fly, and 3 RBI. The bullpen made things dramatic. Alfredo Aceves allowed another run while getting his 6th save of the season. Aceves saved this bullpen last year. But relief pitchers tend to fluctuate season to season. He's allowed 10 earned runs already, in only 13.2 innings. If he doesn't settle down, the Sox bullpen becomes very shaky.

The Sox had more of their little failures. Middlebrooks made an error. His third. Gonzalez got picked off. The Sox lose because they do the big things wrong (starting pitching, hitting with runners in scoring position) and the little things wrong.

Even though the Sox won, the way they won isn't the right formula. Buchholz played with fire all night, allowing so many baserunners. The bullpen gave up some runs, and if not for Pedroia having a big game, the team loses. Long-term, it's a losing formula.