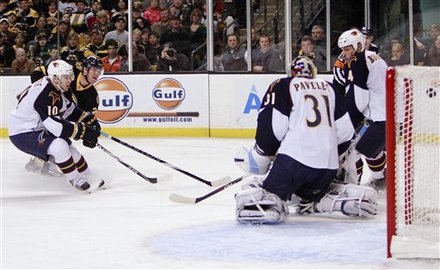 Atlanta is not a good team. Atlanta played a very flat game. The Bruins played 45 flat minutes, and 15 minutes with energy. That's why they won. And this team continues to frustrate the hell out of me, even when they win.

Michael Ryder scored a goal on a penalty shot, and that's great. He's been playing well lately, and that's great. He has had some good playoff series in the past, and that's great. But he's not consistent. He might go on a tear and score some goals in the first round. Then he'll disappear. He's my least favorite player on the Bruins because even when he scores, he pisses me off. I mean, where was it 2 weeks ago, Ryder?

The last time the Bruins played at their best, and beat a legit team that was also playing at their best, was February 26th in Vancouver. That's too long ago. The Bruins now have 4 games left to build good habits, and get ready for the postseason.

Tonight will be a good test, as they play the Rangers, who only have a 2 point cushion between themselves and 9th place Carolina.

DON'T WEEP ABOUT THE SWEEP 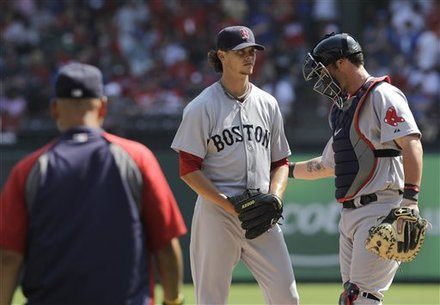 All the anticipation for Opening Day and then the Rangers outscore the Sox 26-11 in three games. Don't panic yet, though. The Sox can still win those magical 100 games, if that's what you care about. They'd just have to go 100-59 in the remaining 159 games. And that's certainly possible.

Had the Sox done well this weekend, I would have been my wet blanket self, and pleaded for everyone to settle down, as it's only April. Well it is only April, and so therefore I'm not too worried about what we saw in Texas.

Carl Crawford is going to improve. He broke out a bit on Sunday, after going hitless in the first two games, and being demoted in the lineup.

Clay Buchholz allowed 4 runs off 4 homers. Apart from those occasional mistakes he was spot on. It's not as if he was allowing 4 or 5 hits in an inning, and being ripped apart by the Rangers' batters. He made some big mistakes, but not many, and give Texas some credit for capitalizing.

And there were some positives this weekend. Adrian Gonzalez has settled right in. 5 for 9 over the weekend with a double and 3 RBI. I feel a burst of homeruns coming from him.

And there doesn't seem to be the annual Ortiz slump in April. Two homeruns already. And when he pulled the ball, he hit it hard enough to get it through the shifted infield. That's a very good sign.

Now to the bad news. John Lackey looked awful the second time through the lineup. Everyone's hoping he improves on his 2010 performance, but none of us (my pessimistic self included) considered that he might get worse.

And the bullpen needs to be "sorted out," to put it mildly. I don't put much stock in Papelbon's struggles on Sunday, as it was a non-save situation after he'd been sitting all weekend. I don't think he even warmed up once. The other pieces to the bullpen puzzle will take some time and some headaches to fall in place.

One thing I hope you all learned this weekend is how important pitching is. The starting pitcher is literally the ONLY player who can singlehandedly lose a game for his team. They're also capable of doing the most to help his team win. Lackey lost Saturday's game, pretty much on his own. And on Sunday, Matt Harrison's 7 innings did more to help Texas win than any of their homerun hitters.

So buck up, there are 159 games left. I mean, Baltimore's in first place. It's not yet time to take things so seriously.

Red Sox at Cleveland for three, starting on Tuesday.