The Oakland A's had Moneyball, the Red Sox have Cheapball 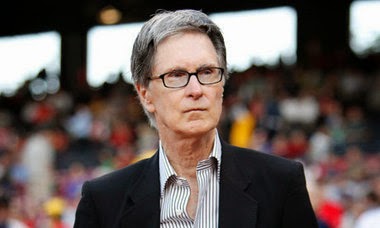 The study John Henry is partially basing this significant baseball decision on makes sense. It makes sense that a player over 30, who has proven what they can consistently do at the Major League level, would get more money, even more money than their production merits. Such players come with guarantees, or at least the closest things to guarantees you can get. There's also a short supply of such players, and high demand, which drives the cost up.

For the Sox to keep Lester, they'd have to "overpay" for what Lester gives them. So what? When has that stopped the Sox before? They overpaid to extend David Ortiz, they overpaid to bring Stephen Drew back. So Drew is worth $10 million a year and Lester only worth $17.5 million? That's what the Sox offered Lester before the 2014 season.

The Sox have also been able to benefit from Lester while underpaying him. He makes $13M this season, and made under $12M in 2013. Before that he never got paid more than $8 million a year.

One problem facing Henry and his value study is that the high end SP market is overwhelmingly made up of pitchers 30+ years old, with a few 29 year olds mixed in. Henry's philosophy pegs him into a corner, since there are essentially no proven, high end SP free agents under 30, he'll never be able to sign one OR re-sign one. Meanwhile, the rest of baseball seems happy to sign these guys. So while Henry can pat himself on the back for saving money, other teams will win games thanks to their overpaid players.

Overpay to win, or save to lose?

John Henry's unwillingness to overpay for 30+ year old talent is like someone buying a 6-pack of beer and staying home by themselves on a Friday night because drinks at bars are more expensive. He'll keep more cash in his pocket but the people who went out will have more fun.

There's no salary cap in baseball. The Red Sox are one of the most valuable sports teams in the world. Their cash flow is one of their biggest competitive advantages. The Sox can overpay for a key player and not be crippled by it. Yet they're the ones being cheap? Because of a study?

John Henry doesn't want to exploit that edge. He's figured out that the 29 other teams are wasting money, and he won't do it. He'll get his 6-pack of beer and drink by himself while other teams are having fun at the World Series.

Had Jon Lester's contract expired after the 2012 season, John Henry might have used this study to justify not re-signing him then. Lester would have been 29, and Henry might have wanted to avoid signing a soon-to-be 30 year old to a long term deal. So if Lester had been a free agent before the 2013 season, it's possible that Henry wouldn't have wanted to sign him.

What would that have meant for the 2013 season? There wouldn't have been a parade in Boston.

Parades are expensive. John Henry and the Red Sox have become cheap.